January 25, 20131 In Every 43 Venture Capital Dollars Is Now Flowing Into Music… 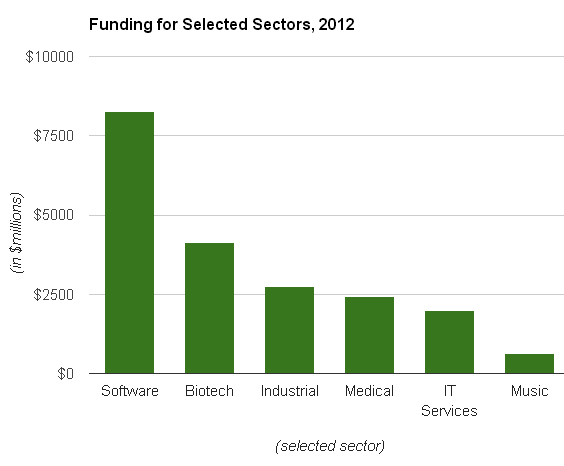 Is this a simple case of dumb money, or the beginnings of a totally new industry? Because for all the collapse and total devaluation being experienced by the music industry, there are still plenty of people willing to gamble. That is, to the tune of roughly $621 million in 2012 alone according to Digital Music News stats, which now turns out to be roughly 1 in 43 dollars committed by the broader VC investment community last year.

The math is a little rough, but the conclusion pretty stunning.  According to figures just released by PricewaterhouseCoopers, Thomson Reuters, National Venture Capital Association (NVCA), total financing across all sectors topped $26.5 billion in 2012.  That was a drop of 10 percent, the first fall in three years, yet music jumped a healthy 34 percent.

But why?  In fairness, music-specific financing absolutely pales in comparison to sectors like biotech and medical, which attracted more than $1.2 billion in the fourth quarter alone.  Then again, it’s never been that huge of an industry to begin with (relatively speaking).

The question is whether 2013 will be as kind.  Last year, Spotify and Deezer attracted nearly $250 million alone, and now they have to spend it.  But early signs look good: Google has already plopped an estimated $50 million in VEVO, a healthy start.

Of course, there are the brutal figures on VC-backed success rates.  A recent report showed that 3 out of 4 startups playing with $1 million or more don’t make it, a percentage that undoubtedly increases in music.