Test Kitchen is the product of many people’s efforts, but the concept of Bill Chait and Brian Saltsburg.  Test Kitchen is a showcase for chefs by restaurateurs and allows for experimentation and testing of new ideas and concepts.  Visiting chefs will be serving dishes they are working on for future restaurant projects.  Mixologists provide innovative pairing opportunities and avenues to express their craft.  Each chef will be working alone or in consultation with Ricardo Zarate, who is currently finalizing his own restaurant.  As each chef comes in, they have a conversation with the Prescriptive Music programming team to make certain that the musical vibe is set for their evening.  Prescriptive Music specializes in creating custom music play lists for each and every location and every chef! 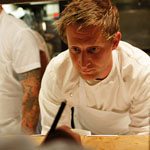 At 31 years old, Michael Voltaggio follows in his older brother’s footsteps in the way of being a highly accomplished Chef at such a young age, in such a short period of time.  He has worked in restaurants since he was 15, and has studied under several celebrity chefs. The majority of his training has been in European fine dining kitchens with an emphasis on modern technique, flavor, and presentation.  He has helmed such kitchens as the historic Greenbrier in West Virginia, Charlie Palmer’s Dry Creek Kitchen in Healdsburg, and garnering a four-star review for being Executive Chef at Bazaar by Jose Andres in Los Angeles.

Michael is currently the Chef de Cuisine at The Dining Room at The Langham, Huntington Hotel & Spa in Pasadena, California. Michael describes his style of cooking as sophisticated American Cuisine utilizing modern technology and classic disciplines of cooking.

With equal amounts of passion and creativity, Executive Chef/owner Ricardo Zarate crafts his inspired cuisine using market-fresh ingredients and a vast knowledge of food gained while working in some of London’s top restaurants. From the defining kitchen of Zarate’s childhood home in Lima, Peru, this chef has been creating sublime, memorable meals for serious food lovers for over 15 years. 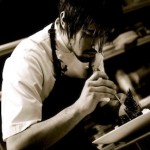 Visions of Concord grape bubbles, cocoa sable crumbs, and carrot glass have been dancing in Pastry Chef Jordan Kahn’s head since he was a child. His first kitchen job was in his hometown of Savannah, Georgia when he was only 15 years old. A year later he enrolled at Johnson & Wales and graduated in just eight months. His first job out of school was at Thomas Keller’s The French Laundry. Kahn was 17; the youngest chef to ever work in Keller’s kitchen. But that’s Jordan Kahn for you: inexhaustibly creative and—perhaps a bit insanely—driven.

Chef Michael Mina tapped Kahn to work at his eponymous restaurant in San Francisco. Kahn then transitioned into a corporate role, assisting in the opening and operations of Mina’s multiple restaurants across the US and in Mexico. Kahn settled down at Mina’s LA flagship, XIV, where he once again broke boundaries and redefined dessert. Kahn’s mission to challenge convention and reinterpret tradition (think: wood ice cream) has already distinguished him in the culinary world. Where he’ll take pastry next remains to be seen; Kahn is currently pursuing his own restaurant project.