Music may be the food of love, but do diners love to get a serving of Pink Floyd or the White Stripes with their main course? Well, forget just classical or jazz standards: More and more restaurant playlists include rock, country, hip-hop and other tunes that once were considered atypical.

“In a restaurant, all of your senses should be stimulated,” says Wolfgang Puck, who loves to play the entire “Dark Side of the Moon” album in his restaurants. “The food should taste good. The restaurant should look good. The music should sound good.”

Mozart, Frank Sinatra, Led Zeppelin, Patsy Cline, Kanye West. Although the music should sound good, there’s no consensus about what that means. Often restaurateurs turn to professional music consultants or DJs. Sometimes the chef or a music enthusiast on staff takes control. But across the board, a broad range of musical choices can be heard at restaurants.

“I don’t see any music being excluded from a restaurant,” says Tom Miner, a principal with Technomic, a marketing, research and consulting firm for the food service industry. “There’s an appropriate venue and time for any type of music. It’s about the right music for the right audience.”

“Fine-dining restaurants can be intimidating,” says Scott Drewno, executive chef at Puck’s The Source in Washington, D.C. “We want you to have fine food and fine dining service, but it doesn’t have to be regimented. We want you to have fun while you’re eating and not be too stuffy. Upbeat music keeps the atmosphere fun. It’s very important that the food comes first, but it doesn’t have to be uncomfortable.”

Sound technology and better music systems also play a role. “With recorded music, you can take hard-charging, exciting music and dial back the volume on your system to a pleasant level,” says Eric Felten, musician and author of “How’s Your Drink?: Cocktails, Culture and the Art of Drinking Well.” “It’s soft, but the energy of the music is there. The ability to play rock or club music over a system lets you play exciting music without taking over the dining experience.”

Chefs like Puck and Mario Batali, who were at the forefront of bringing modern music to upscale restaurants, are leading the charge. Puck may be partial to Pink Floyd, but he spins tunes that range from Mary J. Blige to Rod Stewart.

Batali mixes it up, too. “We play everything from Frank Sinatra to Jane’s Addiction, depending on what time of the evening it is,” he says. “I think it feels good to be in a restaurant where the music isn’t an afterthought. But we don’t take requests.” 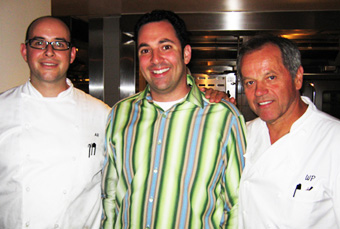