Sufjan is back to his roots, Courtney Barnett watches the world go by and why our clients love lo-fi hip hop - it's RXCOMMENDS! July 13, 2021 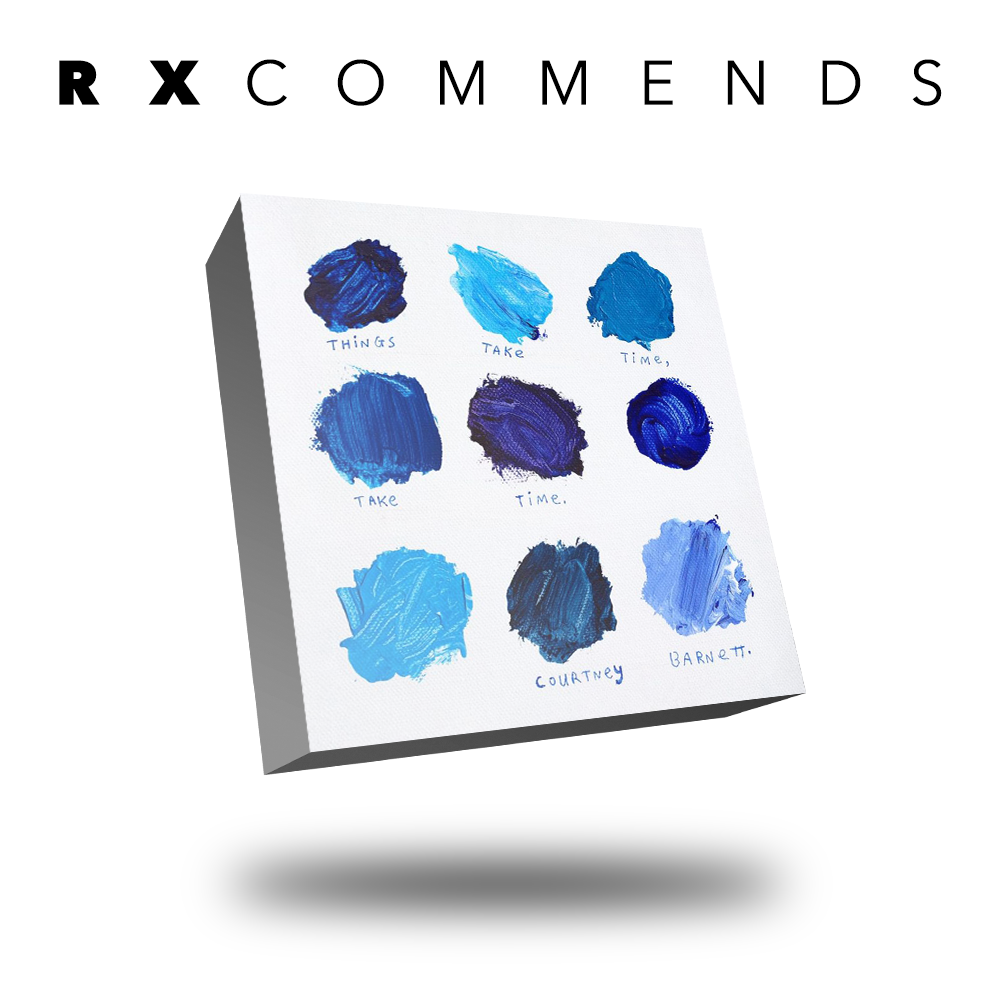 It’s been three years since we last received a proper solo studio album from Aussie indie rock sensation, Courtney Barnett. She caught the mainstream’s attention back in 2015 with her excellent debut, Sometimes I Sit and Think, and Sometime I Just Sit, and her knack for writing catchy tunes with sharp specific lyrics has only gotten stronger.

On her brand new single, “Rae Street”, Barnett watches the world go by and reminds us, “Well, time is money/And money is no man’s friend”. It’s an introspective track that recalls her work with fellow mellow troubadour, Kurt Vile (the two partnered up for 2017’s Lotta Sea Lice) and is a perfect fit for some easy summer listening. Whether it indicates a more mellow album ahead (her upcoming LP, Things Take Time, Take Time, arrives November 12) is anybody’s guess, though thankfully it seems Barnett is not compromising. She sings at the end of the song, “You’re just hangin’ on/Let go of that expectation /Change the station/And find out what you want”.

If Barnett has more quality tunes like this one in store, then it will likely be what lots of people want.

A trend we have noticed recently at RX Music is our clients asking us for “lo-fi hip hop”. Inspired by producers such as J Dilla, Nujabes and Madlib, “lo-fi hop hop” consists of relaxing, downtempo hip hop back beats that are conducive to background music. The popular YouTube stream featuring a loop of a studying girl and her cat called “lofi hip hop radio – beats to study/relax to” explains the function of this music right in the title – chill music for deep focus or relaxation over a drink or some food. It adds a comforting eclectic ambiance without the stiffness of older lounge tracks. Us music consultants have had lots of conversations of how to best implement this music in our client’s programs and we tend to lean more towards the upbeat side of lo-fi hip hop. Perhaps a coffee shop may require the warm glow of light as a feather percussion with soft keys and washed-out bass, but this proves a tad too mellow for our other clients. “Sebajun” by DJ Grumble is a perfect example of lo-fi done on high. The percussion is louder, there’s a light saxophone and flowing piano chords. It has more of a classic soul feel to it, than something more suited to indie folk. This kind of lo-fi hip hop has a home in hotel lobbies, BBQ joints, cocktail bars and upscale seafood places. It’s lofi hip hop to study to/relax to/have a laugh to/eat calamari to/polish off some ribs to/wait for your brother-in-law in the lobby for dinner who always takes too long because he puts his toe in the shower 5 minutes before the scheduled time to meet…to.

“I Love You, I Hate You” – Little Simz
By: Ben Birchard

British born rapper Simbiatu “Simbi” Abisola Abiola Ajikawo, better known as Little Simz is a force to be reckoned with. Especially after her third studio album GRAY Area won best album at both the Ivor Novello Awards and the NME Awards and was further nominated for the Mercury Prize.

Her latest single “I Love You I Hate You” is a blistering anthem dealing with issues of parental abandonment “Never thought my parent would give me my first heartbreak (I hate you)/Anxiety givin’ me irregular heart rate (I love you)/Used to avoid gettin’ into how I really feel about this (I hate you)/Now I see how fickle life can be and so it can’t wait (I love you).” Her lyrics and flow are those of an artist at the top of their game, and musically this track cooks. Opening with a recurring theme from the horns that could serve as the opening of a Bond movie, the beat then drops on the track and from there it builds up and crests several times over. Muted guitar trades off with waves of backing vocals accentuating the verses, all the while the “I Love You/I Hate You” relentlessly hammers home the complexity of emotions at play.

If this single is a harbinger of things to come when the full album Sometimes I Might Be Intovert drops in September, we all have something to look forward to.

I didn’t know why a new-to-me band had a familiar sound to them until I read a bio and discovered that Soda Blonde was formed by members of the now defunct Little Green Cars.

In my opinion – you don’t often see bands handle splits, for any reason, very well. The more I read about this split, the more impressed I became. When John Bonham passed away, Led Zeppelin just called it quits, because without Bonzo, there was no Led Zeppelin. I have so much respect for that.

So, when the two main songwriters in Little Green Cars (Faye O’Rourke and Stevie Appleby) had paths that were growing too far apart to maintain in one band – that was the end of it. The other three members of the band (guitarist Adam O’Regan, drummer Dylan Lynch and bassist Donagh Seaver-O’Leary) were still on the same page as O’Rourke, and so they continued on but as a new band and with new music – Soda Blonde. Leaving behind all the leverage built up from a successful band to start over with most of the same lineup is giving up a huge advantage. If it was a choice driven by integrity of art, I have a lot of time for it and I hope the Eagles (lead by Vince Gill) take note.

Their first album Small Talk is a great take on modern pop. Human playing with electronic elements. Lynch’s drumming is so of its time – metronomic while soulful all at once, rhythms dancing with the melodies. Even so, it’s really a coming out party for Faye O’Rourke as a powerhouse front for a band. Her vocals are powerful and sweet, her lyrics are intelligent and accessible.

The whole album is solid, front to back, but a standout for me is “Love Me World”. O’Rourke explores her lower register, the bass line is playful but grounded and the result is a perfect sound for the pool, after sunrise, before cocktails, just settling into the day.

Like many other fans of Sufjan Stevens, I have been wondering for years where the original Sufjan sound had gone. We were promised albums about all 50 states but instead we got two and a bunch of outtakes. Sufjan’s whimsical, over the top folky ballads rooted in local history on Michigan and Illinois have largely taken a backseat while he branched out into art rock electronica on The Age of Adz, stripped back and solemn folk on Carrie & Lowell, contemporary classical on Planetarium and new age followed by dark tinged electro pop on Aporia and The Ascension respectively. As much as I respect Sufjan as an artist for expanding his craft across such a variety of avenues, I’ve always hoped for another State album or a similar work. Sufjan released two new tracks last week that have given me a glimmer of hope. Sufjan has teamed up with fellow folk singer songwriter Angelo De Augustine for two new tracks off an upcoming album called A Beginner’s Mind in September – where every track will be based on a different movie. “Reach Out” is based on the 1987 movie Wings of Desire, a fantastical film about angels inhabiting Berlin through the Cold War. Inspired by this work, the song has the baroque pop feel and whimsy of Sufjan’s State project era material. De Augustine and Sufjan’s uplifting duets accented by bells and xylophone taps over plucked chords and piano keys that rise towards a crescendo but never quite hit it makes this track soothing but more upbeat than you’d think. I’m very excited to have another Sufjan album on the horizon that’s inspired in some part by history and the pop cultural zeitgeist that seems to be indicative of an era I thought I’d never see again.

However, if Sufjan is done with the 50 States project – I get it. I don’t think he’ll ever make one of those again. However, why doesn’t he look north? Canada only has ten provinces and just three territories! Start with Ontario! I’d love to hear tracks like “Alas! Sweet Niagara Falls, Why Are You Surrounded By Haunted Houses?”, “For Sledgehammer, The Wonderland Ride That Never Works” or “Patio Lights! Too Bright! Kim Mitchell Please Relent!”