Home › Editorial › Music, Culture & Everything › What Did You Get For Christmas?

What Did You Get For Christmas?

It’s January. It’s a tough fact to face, but it’s true. The holidays are over and the warmth and light of the season will be tucked away in basements and closets until next December. However, now we get to enjoy (or return) all the great gifts that we’re left for us underneath the tree.

So…. What did you get for Christmas?

The present that was so nicely tucked under my tree was this ‘Best of’ LP by a band I had never heard of, Brand X, and I was absolutely blown away to see the drummer on this record was none other than Phil Collins. 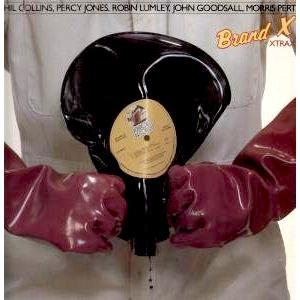 Before Genesis really took off the british drummer/singer joined forces with Percy Jones (bass), John Goodsall (guitar) and Robin Lumley (keyboards) to create some of the best Jazz fusion of the 1970’s.

In a scene that was largely cornered by the likes of Weather Report, Mahavishnu Orchestra, and Soft Machine, Brand X signed to Island Records as a “jam” band in 1975. By the time Phil Collins took over the leading role from Peter Gabriel in Genesis’ 1976 release A Trick of the Tail, Brand X had been in the studio a number of times but never released anything of real consequence. That changed the same year when Brand X released Unorthodox Behavior.

Of course, this was always a side project for Collins. Whenever a Brand X show conflicted with a Genesis date, Collins would understandably sub-out. However, it’s a testament to his playing that in order to “make do” they had to call this guy:

Brand X would release a number of other albums throughout the 70’s but never really had the staying power of Genesis – regardless, it’s mighty refreshing to hear Collins playing in an instrumental role. Too many Disney albums can certainly make one become jaded to your whole catalog of work.

Download Phil Collins to your MUSICBox On-Demand via the PCM Online Music Catalog by following this link.