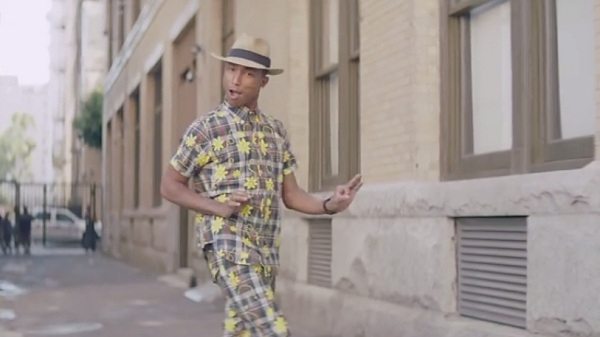 Through the early 2000’s, Pharrell Williams was a fixture on the Pop, R&B and Hip-Hop Charts.  Working as one half of the production team Neptunes, Pharrell was producer and/or featured artist for stars like Nelly, Justin Timberlake, Jay-Z, etc.

While Pharrell continued, perhaps less visibly, to hone his craft of marrying beats and hooks together, he ceased being a mainstay on the charts; to the point where prior to 2013 he had not been part of a track that cracked the Billboard Top 40 since Gwen Stefani’s 2006 track ‘Wind It Up’ peaked at no. 6.

Well, 2013 was a big one for Pharrell. The debate over ‘song of the summer’ centered largely around Daft Punk’s ‘Get Lucky’ and Robin Thicke’s ‘Blurred Lines’ – both of which have Pharrell listed as a co-writer/performer;  the latter for which he also served as producer.

The cherry on top of Pharrell’s completely unpredictable comeback of 2013 is a 24-hour jaunt into the lives and dances of the fine folks of Southern California. The video for the solo release ‘Happy’, which appears on the Dispicable Me 2 soundtrack, although amazingly satisfying, is not something one should watch in one sitting – unless of course you’re into that kind of thing. Even Molly Beauchemin, the extremely dedicated writer from Pitchfork, could only do it in 2-hour segments over the course of several days.

The video itself is a sort of a 24 hour round-the-clock montage of people dancing as “Happy” plays on repeat. The interface allows the watcher to toggle the video to different times of day, as well as allowing the watcher to share favorite moments on Facebook or Twitter. Tyler the Creator, Earl Sweatshirt, Magic Johnson, and Steve Carell all get in on the fun!

Unless you’ve got a whole day to kill and REALLY like this song don’t watch the whole thing, but do enjoy it in short bursts here.

Download Pharrell to your MUSICBox On-Demand via the PCM Online Music Catalog by following this link.