We pick our favorite spooky tunes - new and old - that we are programming in our Halloween mixes this season! October 28, 2021

Welcome to RXCOMMENDS, where our team of music curators pick the best tracks released this week. This week we have something delightfully devilish planned. In accordance with the spooky season, we are taking a break from showcasing the new tracks we are programming each week to bring you some of our favorite, spooky Halloween horrifying hits that we are including in our clients Halloween background music mixes this October! 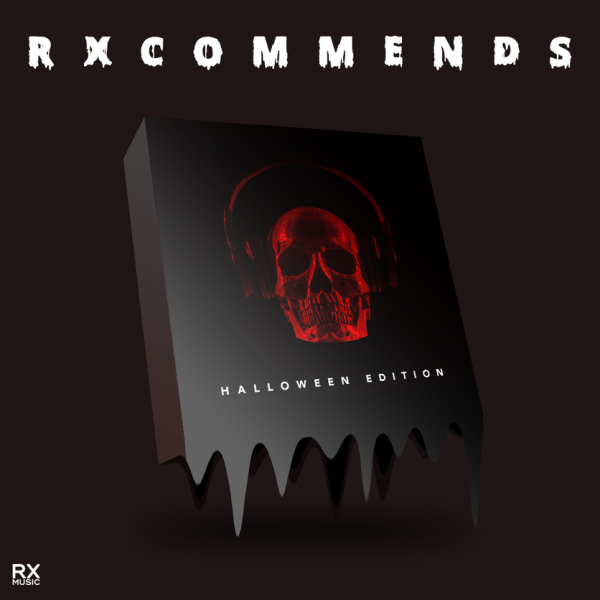 “It’s All Forgotten Now” – Al Bowlly with Ray Noble and His Orchestra
By: My Cult Grim-iani (Michael Primiani)

This Depression era oldies track from 1934 is just plain spooky. Maybe because it comprises a singer and an entire orchestra playing to you completely from beyond the grave. But it’s probably because this song was programmed as a part of the background music at the luxurious Overlook Hotel. Legend has it that the music consultant handling the place went mad. Did he chase his family with an axe through the snow? Worse, he made a Christmas music program comprising of Mariah Carey’s “All I Want For Christmas is You” on repeat and he downloaded it to the MUSICboxes of all of our clients. Our Operations Team was up all night with angry phone calls and removing all of these programs. All joking aside, this song adds the perfect spooky ambiance to your hotel’s Halloween program as it was featured in the most famous horror movie to have been set in a hotel – The Shining. Goes perfect with stumbling into a 1920s soiree in an abandoned ballroom, or a glass of red rum on the rocks at the hotel bar.

“Everybody (Backstreet’s Back)” – Backstreet Boys
By: A-ghoul-lis Machoman (Adulis Mokanan)

If you ask the Backstreet Boys if “Everybody” is a Halloween song, they might tell you no. It was their “comeback” song, a lead single for their second album Backstreet’s Back. But I think the song has become synonymous with Halloween because of the six minute spooky music video, which has to be somewhat inspired by MJ’s “Thriller” video right?

A fun song by the legend Chuck Berry, that you can tap your feet to on Halloween.

On this track, Common Holly crafted the perfect “this track sounds like it should come with a smoke machine” type song. Perfect for your “adventuring through foggy woods – indie” playlist.

“Doing it All For My Baby” – Huey Lewis & The News
Ben O’ Lantern (Why Does Jack Get All The Love?) Boo-chard (Ben Birchard)

I’m not a costume guy, and since I stopped collecting candy on October 31st, I’ve not really been Halloween guy. Costumes can get expensive, and I’m pretty happy to just watch The Shining and call it a night. But we can all agree on Huey Lewis and the News, right……RIGHT?!? Everyone is going to be playing “Thriller”….fire up “Doing It All For My Baby” and really impress your crowd on All Hallows Eve.

This cover by Lana Del Rey is a silky and hypnotic take on Donovan’s psychedelic original. On top of the fascinating layers and textures in the arrangement, her wispy, double-tracked vocals present the simple, repetitive melody line in a way that pulls you into the song like some kind enchantment. Unlike the original, Lana’s version has a celebratory feel. She has been known to perform hexes, after all.

Escaping out of Outkast’s 2003 spooktacular double album, Speakerboxxx/The Love Below, we can’t make a Halloween playlist without featuring André 3000’s “Dracula’s Wedding”.  This lo-fi earworm oozes vibes with its synthy broomstick bass, ghoulish guitar and cackling vocals.  On this tricky track André 3000, portraying Dracula, brings vulnerability to the vampire, who despite being scary himself, is scared of love, just like the rest of us.  Singing opposite to Dracula is Kelis, sweet as candy, howling from the perspective of Dracula’s love interest.  It’s a RIPping toon perfect for any haunted house parties!

“CANDY COUNT” – Pancake Manor
By: Ben O’ Lantern (Why Does Jack Get All The Love?) Boo-chard (Ben Birchard)

For the parents! If you have little ones and have had the Wiggles on repeat for 3 years, may we suggest Pancake Manor – “Candy Count”. Your kids will love it, it’s extremely listenable for the parents, and they have a good sense of humor about them. Don’t forget to nab a couple of your favorite chocolate bars before your kids count up the candy!

While the sound and aesthetic of this track might not be the most traditional sounding Halloween tune, I wouldn’t be surprised is this became a Halloween staple for most folks.

“Vampires” – The Midnight
By: My Cult Grim-iani (Michael Primiani)

The Midnight is a synthwave group that specializes in neon light tinted, 1980s John Carpenter horror soundtrack entrenched soundscapes. This track is perfect for spotting the fangs on the suave guy at the hostess stand hidden by his protruding bottom lip. The layers of arpeggiated synths provides the perfect setting for spotting ghosts in the downtown city streets or ghosts in the machine of your video game screen or the cobwebbed Polybius machine at the back of the arcade bar. The saxophone that absolutely rips through the noise accenting a rainy, moonlight drive – as you hear baying hounds in the distance.

I get it. Some people just aren’t fans of anything too spooky. Sometimes even I’d rather just dance than scream the night away on Halloween. This year, Wankelmut, Selva & MATTN have achieved a perfect balance of both! Their brand new dance single “Scary Monsters” will only scare you only enough to get your body moving! Perfect to play in a haunted house or the club! The range is simply terrifying.

Check out these tracks and other spooky tracks on the Spotify playlist below. Have a fun, safe and Happy Halloween from all of us here at RX Music!