In our second annual installment of the RXCOMMENDS Christmas special, check out our team's favorite Holiday tracks that we have enjoyed programming for our clients this holiday season December 16, 2022 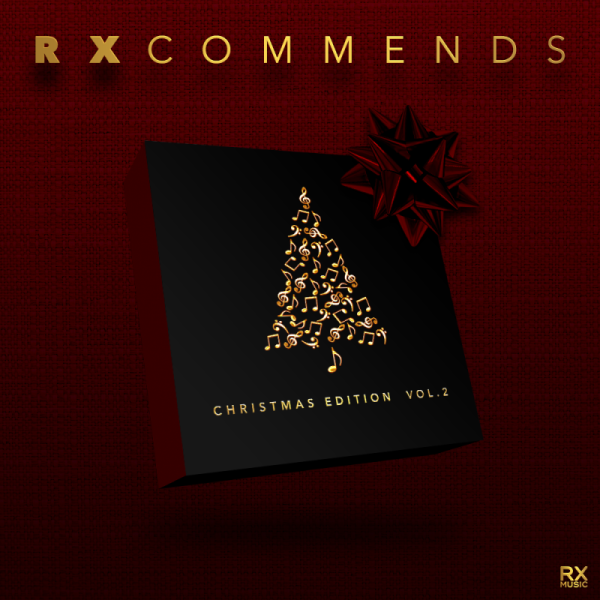 Welcome to the second annual RXCOMMENDS Christmas Extravaganza! For us music consultants, Christmas is our busiest time of the year. Why? Because it’s the only time when 80% of our clients all need different music at the same time! Some go the classic route of half traditional-half contemporary but we also love making our super custom playlists – like Indie Christmas, Texas Country Christmas, Hip-Hop Christmas, “funky up-tempo jazz Christmas” (this is real) and more! I wish 80% of our clients turned to my awesome Halloween mix for the spooky season, but Christmas music is where the big change occurs. We all have our favorite Christmas tunes that prove that Christmas music isn’t all worth an eye roll and a bah-humbug and here’s a few of them that we have been enjoying this holiday season and that we have been programming for our clients. So put those Christmas cookies in the oven, queue up Home Alone (or Home Alone 2 but not 3,4, Holiday Heist or Home Sweet Home Alone) and get those Christmas cards at the ready – here’s our RXCOMMENDS Christmas special!

The Beach Boys’ “Santa’s Beard” is a charming holiday song that tells the story of a little boy who visits Santa Claus at the department store, only to discover that he’s not the real Santa. The song celebrates the spirit of Christmas, with its upbeat melody and twinkling bells, and the lyrics capture the innocence and wonder of a child’s holiday experience. The Beach Boys’ harmonies, combined with the sound of sleigh bells in the background, create a festive atmosphere that will bring a smile to anyone’s face. Whether you’re a fan of The Beach Boys or just looking for a festive holiday tune, “Santa’s Beard” is a delightful addition to any holiday playlist. Despite its charm, the song is often overlooked and forgotten in favor of more popular Beach Boys songs. Nevertheless, it remains a warm, nostalgic reminder of the joy of the holiday season.

Typically, I like my Christmas music to be a lot older than I am. And I am vintage enough that The Boss’ version of the 1934 classic is (to my ears) downright contemporary as compared to the Perry Como’s and Peggy Lee’s that tend to stoke my holiday fires.

Setting that aside – you can’t really go wrong with a power-solo from the late, great Clarence Clemons, and when the Big Man doubles down with a booming bass vocal as Santa himself, things really get festive. The live version was released in 1981 (which also later served as the b-side to 1985’s “My Hometown”), and it captures one of the great live bands of all-time at the peak of their powers.

Harkening back to my days as a t-shirt folder extraordinaire at The Gap (circa late 90’s), I recall a Christmas CD that was played on repeat, with about 12 (TOTAL!) songs on it. After the first hour of my first December shift had passed, Bruce and his fabled East Street Band were the lone bit of respite from the other 11 tracks that to this day are incredibly triggering for me.

All these years later, when curating Holiday tunes at RX Music, I keep the playlists long. So while you’ll hear Bruce’s version of Santa Claus is Coming to Town, you’ll have to wait a while before you hear it again, but it’s worth the wait!

It’s hard to find a “new Christmas song” that’s not a tired rehash of an old song written with WWII in the rearview mirror. Once in a while though, we do get an amazing rendition like Kadhja Bonet’s version of “Little Christmas Tree”. With an eclectic and cool soul funk flair mixed with a little bit of dreamy pop – this song beckons you to hear it with the yule log lit (or one of those TV screensavers of a fire with your space heater running underneath it), in the presence of loved ones or just a cup of a wintery craft beer or cocktail. If you’re smashing your hand on the table like Burgermeister Meisterburger demanding more (and no toy makers to the king) then not to worry, look towards the light in the distance that is Bonet’s EP California Holiday for more. The EP includes a cover of Paul McCartney’s “Wonderful Christmastime” that contains 100% less of the worst synths I’ve ever heard!

If you ask me, Vince Guaraldi Trio’s A Charlie Brown Christmas is not only the best Christmas album ever made – but one of my favorite albums of all time. It scored the 1965 TV special “A Charlie Brown Christmas” – which is also essential holiday media. The Guaraldi album is always on at my house, through Christmas wrapping, baking and writing essays and assignments to finish off the semester so I can kick back and watch Christmas movies. I have seen a trend of artists sampling and altering this magnificent album, especially in the lo-fi community next to the backdrop of having a sad Christmas. Khruangbin is here to break the mold with their unique blend of psych rock, funk and dub with influences that span the globe. Their unique style makes for an awesome rendition of “Christmas Time is Here” – with slick percussion and a bass line hand delivered to your stocking from Santa Claus. Happy to say this one can sit right next to Vince GT on my playlist this holiday season!

“Christmas Will Break Your Heart” – LCD Soundsystem
By: Matt Lipson

This year I’ve been gravitating toward sad Christmas songs, which I’m starting to think make up the majority of the genre (projecting much?!). Though I’m fairly new to actually celebrating Christmas, I’m clueing into the possibility that it isn’t always guaranteed to provide the kind of glad tidings and familial bliss that classic Christmas music and Canadian Tire ads usually evoke. LCD Soundsystem’s “Christmas Will Break Your Heart” is possibly the saddest, most self-pitying response to those holly-jolly jingles, so desolate you can’t help but laugh. All the themes of a great sad Christmas song are here: realizing you’re not close enough with anyone to call, the breakdown of a relationship, the magic of Christmas dulling with age. It all builds up to this chaotic crescendo before fizzling out, and I love the way the arrangement reflects the speaker’s emotional experience of Christmas; the slowly-approaching dread, the stress, the relief when it’s over.

In a genre rife with jingles penned in the early to mid-20th century, endlessly covered for easy commercial salability, Low’s holiday song “Just Like Christmas” stands out as something different. Off their 1999 EP Christmas, which the group released as a ‘gift to fans’, this track’s understated lyrics and musical accompaniment provide a warm feel and a reminder that Christmas can be found anywhere. Starting off with a muffled, chugging rhythmic snare pattern and bells to match, listeners are easily transported to the train ride described in the opening line of the lyrics. Low vocalist Mimi Parker goes on to paint a picture of being away from home for the holidays yet being brought back to the feeling of Christmas through youth and innocence, regardless of how much snow you may encounter.

I always found it odd that a song called ‘Little Drummer Boy’ never seemed to feature any drums. You’re supposedly bringing the gift of drums to the king, but rather than actual drums you come with a lame “Pa-rum-pa-pum-pum” which is spoken?

Imagine if you will, the surf rock classic “Wipeout”, but instead of drums you have some guy trying to spice things up between the legendary guitar riffs with a spoken “bap-bap-bop-ba-bap-bop-bop”? It’s foolishness, right? It would score 5 NOPES out of 5.

I guess Meaghan Smith had similar feelings, because on her 2011 record It Snowed she starts off “Little Drummer Boy” with a big beat, worthy of the Funky Drummer himself, and replaces all the “pa-rums” with tight harmonies. If you’re going to honor a king with drums, you’d better throw a beat down, and Smith does. With respect to the finest gifts of both Bowie and Bing, I’ll take my Drummer Boy with some actual, you know, DRUMS.

Big Boi: “Ain’t no chimneys in the ghetto so I won’t be hanging my socks on no chimney”.

I learned recently that Outkast’s “Players Ball” is a Christmas song. “Player’s Ball” was their debut single on their classic 1994 album Southernplayalisticadillacmuzik but the song was actually created for their label LaFace Records’ Christmas album. Outkast didn’t want to make a typical Christmas song so he decided to rap about what they typically do in the holidays, attend a players ball!

English duo Slow Club’s 2010 cover of Darlene Love’s 1963 “Christmas (Baby Please Come Home)” hits in all the right ways. This new school rendition of a Christmas classic maintains its original authenticity with a pleading, agonized and hopeful vocal performance, along with an ear-filling “wall of sound” production style, first pioneered and made famous by the original version’s producer, the infamous Phil Spector. With a slightly modernized sound, subbing in distorted guitars for baritone horns, Slow Club’s take will satisfy fans of the Darlene Love classic while bringing a contemporary feel sure to keep all generations of the family feeling merry and bright!

While so many Christmas songs are stale covers or uninspired originals, early 80s band, The Waitresses, did it right, delivering arguably the best song of their six years together. Their 1982 classic, “Christmas Wrapping”, is a fun tour de force of pop hooks and relatable Christmas moments. From being holiday hesitant (“Bah humbug / no that’s too strong”) to needing a break from all the madness while feeling alone (“Raise up cups of Christmas cheer / I just need to catch my breath / Christmas by myself this year”) it speaks to things that anyone who’s celebrated Christmas has likely felt. All is not lost though. Triumphant guitar hooks, an irresistible saxophone lead, and perhaps the best bassline in all of holiday music, keeps thing afloat and moving in the right direction. Then when love that had previously slipped by, is found surprisingly at the grocery store (“You mean you forgot cranberries too?”) the season is saved as “that Christmas magic’s brought this tale / To a very happy ending.”

Of course as mentioned no Christmas song this good doesn’t escape being covered by a multitude of artists – from superstars like Kylie Minogue (with Iggy Pop!) to the Spice Girls, even Haim giving it their own spin, there’s still no replacing a true original.

You can check out all these cool Christmas tunes in the Spotify link below:

Beneath the Rhythm Episode 5 | Christmas in July