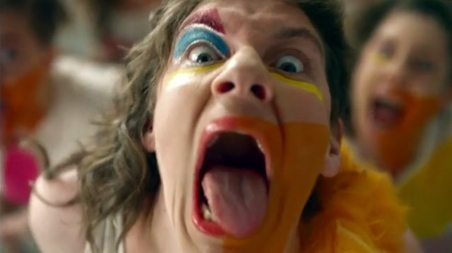 It’s Tuesday! That means labels are releasing all the good stuff today!

Let’s start with Hamilton’s own, The Arkells, who ahead of their new album have given us all a taste with their lead single, “Never Thought That This Would Happen”. This rock ballad isn’t too much of a stylistic stretch for the band but it’s encouraging to hear them make some strides in their studio work.

Next we’ve got tUnE-yArDs (pictured) who also released the second single from her May release “Nikki Nack”. This track is just as creative and challenging as is expected from the New England art-rocker. She’s seemed to have ditched the sax section and added a lot more electronics into the mix. This absolutely gives her work a different flavor.

Also out today is the video for Queen’s of the Stone Age’s 2013 song Smooth Sailing off of “Like Clockwork”. Directed by Hiro Murai, it views like a cautionary tale/documentary about some drunken Japanese businessmen. It starts off light and fun and gets pretty dark. It’s a ton of fun to watch though! Enjoy!