In Memoriam: Phil Everly of the Everly Brothers Dies at the age of 74 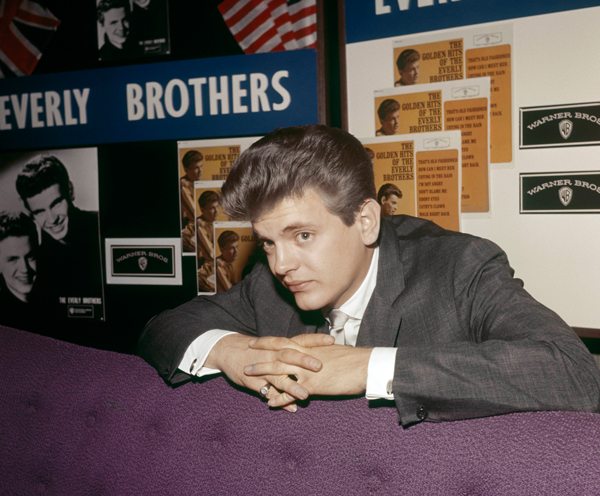 As the younger half of the Everly Brothers, Phil Everly passed away on Sunday of chronic obstructive pulmonary disease at a Burbank, CA hospital.

Relying heavily on vocal harmonies borrowed from Doo Wop groups of the mid-50’s, the Everly Brothers evolved mostly from a traditional country music vein. By combining themes of teenage experience from the late 1950’s, the Everly Brothers became the standard bearer for many rock ‘n’ roll acts that came after, including The Beach Boys, Simon and Garfunkel, The Byrds, and the Beatles.

Even as their own popularity waned with the emergence of new rock ‘n’ roll styles,  the Everly Brothers continued to record and tour until 1973, when drunk and angry Phil threw his guitar on the ground smashing it, saying “I’m through being an Everly Brother,” and stormed off stage. According to Wikipedia, the Everly Brothers did not speak to each other for almost a decade, except at their father’s funeral in 1975.

After semi-successful solo careers and a splash of reunion tours, the Everly Brothers were essentially done. However, their influence on modern rock ‘n’ roll still resonates today.

Download the Everly Brothers to your MUSICBox On-Demand via the PCM Online Music Catalog by following this link.