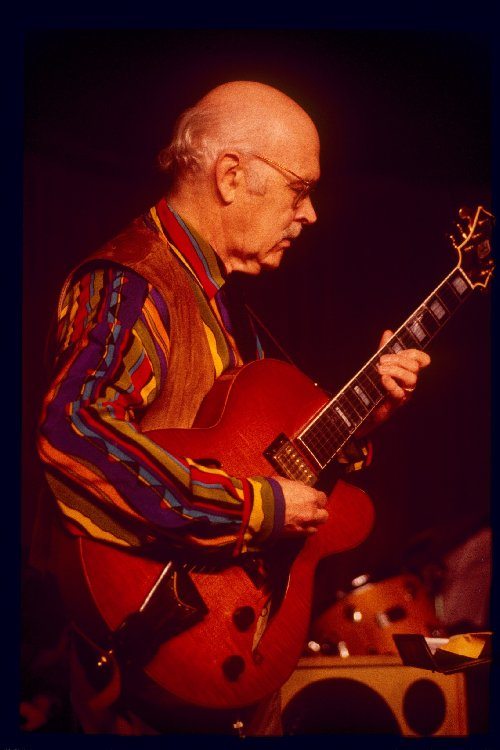 “Jim is father of modern jazz guitar to me, he’s the guy who invented a conception that has allowed guitar to function in a lot of musical situations that just weren’t thought of as a possibility prior to his emergence as a player. He reinvented what the guitar could be as a jazz instrument… Jim transcends the instrument… the meaning behind the notes is what speaks to people”.

Unique, mellow, warm, gentle, subtle, rich, expressive, constantly creative – all of these words can be used to describe the playing of the Jim Hall – the influential “father of modern jazz guitar”.

A Buffalo native by way of Cleveland, Jim Hall played, recorded, or collaborated with many of the Jazz giants of the day. Ella Fitzgerald, Gerry Mulligan, Ornette Coleman and Sonny Rollins all had the opportunity to play with Hall during his career.

Arguably one of his best works was his 1975 playing of Rodrigo’s Concierto do Aranjuez which featured Chet Baker on trumpet.

While always active in playing, Hall was recently planning a tour of Japan with bassist Ron Carter. In 2004, Hall became the first modern jazz guitarist to be named a National Endowment for the Arts Jazz Master, the US’s highest jazz honor.

Sadly, Jim Hall passed away yesterday at the age of 83. So, to honor a musician of his magnitude we will be looking back at the surviving body of work.  Enjoy.

Download Jim Hall to your MUSICBox On-Demand via the PCM Online Music Catalog by following this link.