Toronto’s downtown music scene of the 1960’s is storied, celebrated and often romanticized.  Most Canadian music fans and Torontonians know of the Yorkville coffeehouse Folk scene, spawning the careers of artists such as Neil Young and Joni Mitchell, or surely they have heard tales of The Band cutting their teeth playing Yonge Street bars as the backing band of Honky-Tonk legend Ronnie Hawkins, leading them to their eventual idolized status of “musicians’ musicians”.

Another powerhouse fixture of this era and scene had been somewhat forgotten until recent years when the revival label Numero Group put out reissues of her music in 2017.  The artist I am writing about is Soul singer Jackie Shane.

Jackie Shane was born in Nashville in 1940 during the era of the Jim Crow.  In her youth, Jackie was assigned the male gender at birth and began performing locally while wearing makeup, jewellery, and long-haired wigs.  At 13 years old, she joined a traveling carnival wanting to leave the repressive culture of the Jim Crow South behind her, which first brought her to Cornwall, Ontario.

Once arriving in Canada, Jackie began to feel free to be her true self.  From Cornwall she initially moved to Montreal in 1960 performing with R&B artist Frank Motley and his group Motley Crew (not to be confused with the 80’s glam metal outfit Mötley Crüe).  Jackie eventually made her way to Toronto in 1961, which she called home from then until 1971.

While Canada at the time may have been more open-minded and welcoming to Black communities and individuals of different sexual orientations and identities than the American South, it was still the 1960s and Jackie did not live without challenges.

“One cannot choose where one is born, but you can choose your home.  I chose Toronto.  I love Toronto.  I love Canadian people.  I consider myself a part of them.  The Canadian people have been so good to me.  At first, there were people who are ignorant and talk and talk and don’t know what they’re talking about.  They were curious, but when they got to know me and we grew to love one another – I loved them first.  I had to.  I could not allow myself to be angry.  We became real lovers.  I love Toronto.”

In Toronto Jackie Shane’s live performances gained notoriety, as ethnomusicologist Rob Bowman describes, “…here in Toronto, she was a hero, with an appeal that attracted audiences gay and straight, Black and white – not a small thing in the days before the Stonewall riots, at a time when the effects of segregation were still sorely felt.”

During Jackie’s reign in Toronto, she regularly sold out shows and the height of her success came from scoring the #2 position on the CHUM FM charts with her rendition of Stax artist William Bell’s “Any Other Way”.

Days following a Toronto performance in 1971 Jackie seemingly disappeared, moving to Los Angeles to live with her mother and boyfriend without telling many where she was heading.  Jackie reportedly maintained a closely guarded life until the time of her death in 2019.

Following her disappearance from Toronto, many in the music scene naturally wondered what had happened to her and missed her presence and performing prowess.  Jackie did eventually receive her flowers though, after the revival record label Numero Group convinced her to allow for a collection release of reissues in 2017, earning her a 2018 Grammy nomination for Best Historical Album.  Here in her adopted home of Toronto, her legacy lives on in the form of a 22-storey mural located at 423 Yonge St. alongside Toronto music icons Ronnie Hawkins, Oscar Peterson, and Muddy Waters, to name a few. 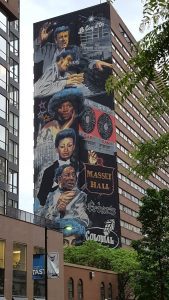