Home › Editorial › Music, Culture & Everything › The Rucksack Willies & How to Bring an Old Genre Into The 21st Century 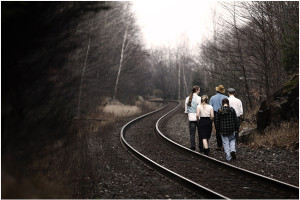 When listening to the Rucksack Willies and their 2011 release Letter to Anne one is struck on how this group of 20-somethings so easily harnesses a sound that is more attributed to their grandparents.

The simple answer is that they were born with it.

Country and folk music, for some reason or another, is in the blood of many Canadians. Wander an hour out of the urban sprawl of Toronto or Montreal in the dead of an August heat, or during the changing winds of a mid-September afternoon, and pick up your ears. In the back-yards, cabins, kitchens, and garages all across Canada you’ll be hard pressed not to find a “festival”: a group of friends and family members coming together singing old songs.

This is the tradition which has spawned the Rucksack Willies and what has inspired the songwriting team of Angie Hilts and Lucas Gadke to bring to the gentrified and highly multicultural streets of Toronto. They’ve brought their down-home sensibility of the often rugged Canadian countryside to the largest city in the nation, and by the way that everyone was dancing to their set, it’s easy to tell that the city is listening.

Since 2008 The Rucksack Willies have wooed Canadian audiences with their down-home approach to songwriting and their keen sensibility of the style of music they’re gracefully (and sometimes forcefully) portraying. While reining in the spirits of Bob Dylan & Joan Baez, The Band, Hank Williams (I & II), Joni Mitchell, Townes Van Zandt, Gillian Welch, and John Prine – The Rucksack Willies plied their trade and perfected their craft for over two years at the Queen West watering hole and musical landmark, The Cameron House.

When I caught their set at the 4th annual Toronto Bicycle Music Festival, the band was better than ever. Even without dobro player, Michael Ekert and with a substitute guitar player sitting in, Angie Hilts (Leader/Voice), Lucas Gadke (Bass/Voice), Galen Pelly (Drums), Adrian Gross (Guitar/Mandolin), and Megan Thomas (Vocals/Washboard) offered the collected group of cycling advocates, 20-something University students, small inner-city families looking for a non-football or television related activity to do on a Sunday, and passers-by something that they won’t soon forget – the realization of a common love for country music.

However, when I sat down with Angie and Lucas at in Grange Park in early September there seemed to be some reservation (at least from a songwriting stand-point) on how much of this “down-home” sound they’d used in their follow-up release due in December.  I was a little taken a back to hear that they’ve decided to move on from a sound that they, and their audience, so easily identify with, but once they explained why they felt that a “new” direction was necessary I was more excited than ever to hear the result.

Playback: So, Angie, tell me about the Rucksack Willies.

Angie: Um, we were formed in 2008 and we, uh, were playing, like, blues music and jazz music at school and we decided to try something different.

A: … now I like it. My grandparents liked Country music, so yeah…

P: So, the Willies were born out of, like, half necessity and half a “labor of love”?

A: Yeah, and then it’s just infectious, it’s just that music that you can just get involved with the songwriting within the space that it provides and it slows everything down. It’s amazing. I really enjoy it.

P: Yeah, Meg (Thomas) was telling me about the new album, I didn’t even know that it was done.

Lucas: Well, I think Angie actually came up to me and just said, “I’m gunna start a band and I need you to be in it”. So, she played me, um, she played Waiting for a Sign for me and I was just blown away by how brilliant it was, like how this sort of raw sound, mixed with this weird musical feel was operating in a genre, but also on the outskirts of it at the same time. I was just really taken aback. I knew there was something I could work with, and you know, we’re such good friends it was easy to turn into good creative partners. It’s been a really great experience.

A: There are two on there.

L: Yeah, so I’m not a big songwriter, like, solo songwriter, um but, I like to contribute when I can. More than songwriting on my own, I work best when Angie, sorta, brings me a song; they’re always so good and I just kinda change one thing, or change another thing – working on it together is always really fun.

P: For sure. That collaborative way of songwriting generally, I find, makes things better as a whole.

*at this point Lucas had to leave to pick up his brother. We say our goodbyes and I wish him luck. Angie and I continue our conversation*

P: So, Angie, tell me about, um, you do the Cameron House fairly frequently?

A: We did a Monday set, 6 – 8 for two years, and it was awesome. I kinda miss it, but we, as a band, thought that we wanted to expand that, something like a Friday once a month – what we actually are doing. We don’t have anything for September, but, November…..

*a flock of pigeons fly by*

A: Ughh… I hate pigeons! They’re, like, all over the place, sorry *laughs*.

A:  Anyway, sorry, so now we’re going to do once a month during a weekend slot and I think that’s a really good thing cause we’ll get a lot more people who are partying and it’ll expand us as well because, um, doing the Mondays it’s a little bit slower and it started to feel a little stagnant.

P: You felt the grind playing Mondays every week on a fairly odd time-slot?

A: Yeah, don’t get me wrong, I love performing and it became this thing I look forward to – it’s like a drug for me. Um, but, by the end of it I felt that everyone was getting tired.

P: Tell me about the new record.

A: Um, so, the last record we did was Letter To Anne which was inspired by my grandmother and she kinda inspired me to play this kind of music while growing up listening to her singing old country music songs at the kitchen table. So I was like, “what is this twang”? A lot of friends of mine, their families have a yearly concert and my family would too. So all of my family is super talented – I’ve got a great-uncle who doesn’t have an ear, but he can play violin amazingly well, and my grandpa gets up there singing, like, Long Black Train… and….

A: Yeah! The feeling in watching their health kinda fade and everything; I just lost one of my grandparents and I just felt the need to kinda dedicate something to them. So the music became more bluegrassy and country, so I dedicated that whole album (Letter to Anne) to them. I feel that it captured us at a certain time-period in our bands progression – even while we were recording that album I feel that we had exceeded past that sound, but it was a really nice capture of us in a certain time, which is kinda relevant to where the whole idea came from: a simpler time kinda sitting on a rocking chair on your front porch kinda music.

I get inspired a lot by Bjork and a little bit more abstract singer-songwriter stuff. And for a while there I felt that, maybe I need another band to do this, or experiment with other artists to be able to let that part of myself kinda go.

So  P: You don’t feel that could you bring that otherworldly creative singer-songwriter stuff to the Rucksack Willies?

A: Well that’s exactly what has been happening and it’s really exciting being able to experiment with different sounds and different ideas of merging styles together.

Like, the song you heard today I Don’t Like It, it’s about the apocalypse, which admittedly sounds morbid, but it’s about being naïve to what’s happening around us.

But the next album is a little bit more like that and we’ve got Josh Van Tassel producing it, and that’s amazing. I sat down with him one day and started talking about ideas of maybe getting him to produce and he started talking about this idea of this concept of having this sound and bringing it to a whole new level. Essentially, I wanted this album to be a journey.

The album is called “Moving On” and it’s about a relationship between a woman and man. The goal is to capture the emotional rollercoaster of their relationship. We’ve been experimenting with some different acoustic enviroments to create this specific space that will reflect the emotional settings of each song. For example: she’s happy and the sound is brighter; she’s sad and sound is dark and heavy.

Of course, capturing this enviromental acoustic space has required some added creativity, which has unforntunally taken more time than I thought.

But yeah, it’s gunna be – well, we got a Factor grant, so it [puts a deadline on it, and] it’s going to be finished by November 20th.

P: …and released in later this year?

P: Awesome! I’m looking forward to it! So – what does 2014 have in store for the Rucksack Willies?

A: My dream, like, what I would like for this band is: to be on tour, have a manager so I can focus on the creative side of things – that kinda stuff drives me nuts.

P: The details are all taken care of…

A: “You mean I get to sing and write songs? Okay, I am totally down with that!” *laughs* … and the rest of the guys in the band will tell you that (regarding leading a band in general) I’m not the best “leader” on stage either so it almost becomes more of a collective.

This is something I’m actually trying to work on because it’s really hard for anyone to take direction from 3 different people. So – that’s something that I need to work on personally.

P: But what about the band as a whole?

A: So, my dream would be like for some one to take care of some of that stuff. Yeah – touring and having enough people [in enough cities] to fill up some rooms – you know, everyones favourite gig.

It’s not like I want super-fame or anything. I don’t want people to be like, “Oh! She tweeked?… twerked?” …. Like you can’t sit at a park anymore.

With the Rucksacks though – it’s a very odd group. There’s definatly a draw that this group just ‘has’. Like, when everyones tearing down and eveybody is coming up to us – or even today was really cool, like, when people started dancing and Lucas was screaming his guts out. I dunno – I think people can tell that we’re doing it because we love it.

P: But what about the future?

A: Oh! Yeah – what I would like is for everybody in the audience to scream along so Lucas doesn’t lose his lungs! That’s my goal.