Home › Editorial › Music, Culture & Everything › The Future of Canadian R&B

The Future of Canadian R&B

With new releases coming out every week, it can be difficult to keep track of all the amazing talent out there. It’s even more challenging for many Canadian independent artists that are striving to become more well-known on a mainstream level. As we’ve seen a resurgence of R&B in Canada in recent years, it is so encouraging that artists, such as Savannah Ré, Emanuel and Dylan Sinclair are being recognized for their talent. With both Savannah Ré and Emanuel recently being signed to Universal Music Canada, it is even more encouraging to see their progress and what it means for other artists hoping to get signed to a major label.

Being an independent artist comes with a lot of consideration about branding, identity, building a following, etc. It’s very important to be strategic and intentional with every move you make. What often draws me to a particular artist is authenticity and the willingness to be vulnerable with their audience. While an artist can choose to let their music speak for itself, I do appreciate artists who strive to find ways to connect with people. For example, artists like Kimbra are so inspiring because she often gives fans an inside look into her process of writing and producing her music. Her Instagram posts vary from casual #ootd pics, shameless plugs of upcoming singles, and short snippets of live performances specially curated for her patrons on Patreon. Her brand of experimentation, fearlessness in creativity, and the seamless blend of various genres is what makes her such a unique and exceptional artist.

For Black Future Month, I thought it would be great to highlight some newer Black Canadian R&B and soul artists that have been on my radar recently. Artists, who are consistent without sacrificing quality. Each of these artists occupy their own unique space within the industry and I believe that 2022 will be a transformative year for each of them.

Check Them Out Below: 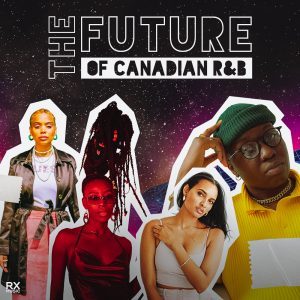 With so many independent artists emerging out of Canada in recent years, Adria Kain is definitely a standout. With smooth, soulful vocals and honest and heartfelt lyrics, Adria’s body of work is fresh, yet familiar. Since publicly releasing music in 2015, Adria has cultivated her own unique sound that has established her as a true artist.

Kain’s most recent project, When Flowers Bloom, is an intimate look into love and relationships, identity and Kain’s own reconnection with nature. The album features lush, jazzy, soulful, and ambient vibes that are equally suitable for staying in or dining out. One of my favourite songs from this project is “Only with Time,” which she performed on A COLORS SHOW. It is a moving, stripped-down ballad that speaks to the process of healing from love lost and how challenging it can be to let go completely. Adria’s soothing, layered vocals paired with mellow guitar lines and crisp drums is perfection. This is a song that lovers of early 2000s neo soul and R&B will truly appreciate.

Leila Dey, another amazing Toronto-based artist, is featured on tracks “Classic” and “Never Change – Interlude.” Her sultry, mezzo timbre is such a complement to this project and I was immediately a fan upon hearing her voice. If you would like to hear more from Leila Dey please check out her album Detour.

All in all, When Flowers Bloom is a “no-skip” gem that gets better with every listen. Whether in the midst of heartbreak or mustering up the courage to pursue new love, you will undoubtedly resonate with what Kain has to offer.  If you love what you hear, Kain will be performing her entire album live at the Paradise Theatre on February 25th.

I was first introduced to Liza’s music while watching an episode of the series “Harlem” on Amazon Prime Video. After a bit of investigating (a.k.a. Shazam) I found the song in question, “Rolla,” which was produced by Akeel Henry and Kofo. This song is luscious and ambient, and her breathy, yet controlled vocals will hook you in. From the first listen, I immediately needed to know more about this artist.

Liza has been releasing music since 2017 and has garnered quite a following ever since. Liza’s 2021 EP, DONE IS DONE is a masterpiece from start to finish. Each track is filled with soothing melodies that allow you to ruminate on the honest and revealing lyrics. The album paints a picture of sorrow, regret, love lost and the pursuit of love even when things look bleak. All the qualities that make for a notable R&B and soul album can be found here.

Liza continues to find success in song placements, opening for artists such as, Kyle Dion and Raveena, and building a loyal fan base. The music industry can be difficult to navigate as an independent artist, so seeing Liza’s continued success is very inspiring. I am very excited to see what the future holds for her.

Mighloe is a Toronto-based singer & songwriter. With such a unique and captivating sound, it’s no wonder that she has garnered the interest of R&B/soul artists such as PJ Morton and Ari Lennox. Upon graduating from The Remix Project – an arts incubator and training program for young people from marginalized and under served communities – Mighloe has really carved out her own space within the industry. She possesses such an ethereal and mesmerizing presence, yet remains extremely grounded in her identity.

Mighloe’s debut album Desperate Times is a dreamy, atmospheric treasure featuring her smooth and silvery vocals. I appreciate that throughout the project, her vocals are the central focus with much more laid-back and ambient production. In doing so, the listener is given the opportunity to meditate on the quality of the lyrics. Two high points from the project are singles “Don’t Call Me” and “Rainy Days,” which I have on repeat.

Her newly released single “Little Lies,” which she debuted on A COLORS SHOW, is a beautifully intimate acoustic ballad. Mighloe’s vocal performance is somehow angelic, smooth, and soulful all at once. This song, in particular, really solidified my support. I believe that her strong sense of self and natural talent will allow her to achieve many great things. You can now check out the studio version of “Little Lies,” which was released on February 24th.

As a Brampton-native, it always brings me joy seeing artists from Brampton shine brightly. R&B and soul artist Zenesoul, who was raised in Brampton, is an absolute star in the making. Since releasing music in 2018, she has continued to grow into her artistry and establish her own lane. Her recent EP, Brown Sugar, is a beautiful blend of R&B and soul and shows off her strong lyrical capabilities. Two songs that I can’t stop listening to are “To Love and Be Loved,” featuring Aaron Ridge and “Yourself.”

Perhaps, what I appreciate most about Zenesoul is that she collaborates with so many other great Canadian artists. Artists such as, Anika Marie, THEHONESTGUY, and Aaron Ridge, who are all making their own strides as independent artists. Pursuing a career in music can be very challenging mentally, emotionally and financially. So, connecting with other artists who understand this can create a strong sense of community. A community, where artists of all backgrounds and skill levels can collaborate, share resources and stay connected with other music lovers. This really opened my eyes to the power of collaboration and how beneficial it can be for independent artists just starting out.

In Zenesoul’s most recent single “Same Old Mistake,” she talks about the importance of acknowledging the part that we can play in our own heartbreak. It is so beautifully produced and her vocals really shine through. The relatability of the lyrics and the soothing vocals will absolutely keep you coming back. If you love what you hear, Zenesoul will be performing at her Single Release Party at Stackt Market in Toronto on February 26th.

As I stated earlier, being an independent artist in Canada can be quite difficult. It can be hard to stay motivated and push through the inevitable obstacles that many artists face. That is why initiatives like Nia Centre, The Remix Project and the SOCAN Incubator Program are so important. Seeing the success of local artists in these programs really solidifies not only the importance of fostering young talent, but also the imperativeness of creating structural change in Canada’s arts and entertainment. That means creating spaces that allow singers, songwriters, producers, and engineers to thrive for years to come. My hope is that even more steps will be taken to ensure the success of all Canadian independent artists, but especially those from marginalized communities.

Check out a curated playlist below:

Black Culture Has Always Been Pop Culture: How Prejudice to Hip-Hop Echoes the Past