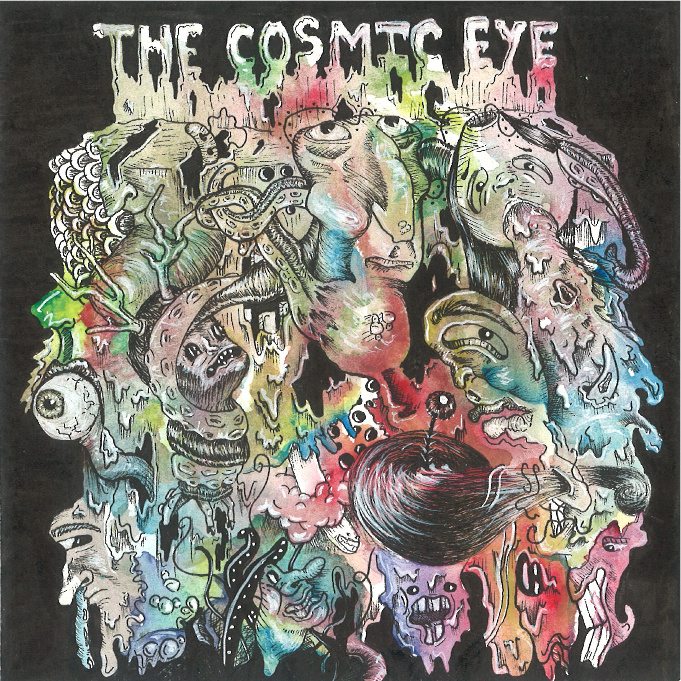 Artist Spotlight: The Cosmic Eye Fight the Giant Octopus and the Realities of Running an Indie Band

I had to ask, “Could you spell that for me?” when Mark Sanders, front-man for the Cosmic Eye, tells me where he’s recording the next Cosmic Eye album.

The studio is tucked away between a row of cottages on Horseshoe Lake owned by the family of Juila Crawford (guitar and vocals) where the Eye brought producer Sam Ibbet, some borrowed equipment, and 4 newly minted songs to record their follow up to their 2013 (officially 2011) release, The Cosmic Eye Fight the Giant Octopus.

I’ve been following the Cosmic Eye, a synth-based, psychedelic, indie rock project out of Toronto since its inception around 2006 or 2007 (even Mark seems to get a little confused on when this band was founded). The band itself sounds like a cross between The Cults, The Black Keys, Camera Obscura, Tennis, and a little bit of Pink Floyd thrown in for good measure. The interplay between vocalists, the “wall-of-sound”, and sheer creativeness of the writing and performance brings everything you’d come to expect from the next “buzz-band” gold mine that major and indie labels are looking to exploit nowadays.

“I’m willing to do mostly anything with music for money” Mark tells me. As disconcerting as this sounds it is the grim reality of a talented musician trying to break out of the glass ceilinged realm between playing shows in local bars to breaking into the main-stream.

It was easy to see, when I sat down with Mark in late July at my home in Toronto, how much of a struggle this has truly been even to release an album.

Playback: Tell about the first song The Cosmic Eye wrote

Mark: The first song I wrote for Cosmic Eye was “My Colors”, it was the ballad-y one. I had no idea what the band would sound like.

I wrote it in 2006 and we weren’t really playing it until 2007. I was doing it by myself; it was just something I had and was doing ‘something’ with.

Playback: I was at the album release earlier this year….

Mark: Yeah, but the album had already “been out” for almost 2 years on the internet. But yeah, we’ve got this new album in the works that’s breathing a lot of life into the band, we’ve got our producer/engineer Sam Ibbet, on board and he’s been really encouraging and extremely helpful getting our feet back on the ground.

Playback: How do you feel that the Cosmic Eye Fights the Giant Octopus reflects the 4 years, as a band and as a songwriter, you spent working on it?

Mark: It just did. We started recording it in; I guess it was, 2009. That summer we were in The Barn (an indie studio in New Hamburg, Ontario run by Mac Jordan and his father) and we had a bunch of studio time through OIART (Ontario Institute of Audio and Recording Technology) that he had hooked me up with. So that took care of the bed tracks and then it took, like, another 16 months of just overdubbing and adding to that sound. When we eventually gave the album to Tristan Henderson, who mixed the album, I want to say that it was over an hour long. Every song was about 6 – 8 minutes long with noise that we’d added.

I don’t want to say that the album itself didn’t reflect us for that time, but it was reflective of us as a group because it simply took so much time to make in the first place. Obviously things change and the things you like change – so we we’re just throwing things into it, whatever we were into at the time and how we felt. You can imagine how 16 months of that added to all that.

It was just such a long arduous journey that it’s really hard to say now, looking back at this album, that it captured us as a group during that time.

Playback: Now that you’ve gone through this process with the first album, do you think that it will be beneficial to spend the same amount of time on the new one?

Mark: No. With Giant Octopus the writing period was a hell of a lot longer – I mean we’ve only been playing new songs for over a year, almost a year and a half now, and for ‘Giant Octopus’ I’d had some songs at least conceptualized for years.  Some of the songs for the new record I wrote just before we recorded them and it sounds great! I think that’s just how this one is going to be. Plan is to have it out in the fall, like, October.

We wrote a tune last night: Steve and I just wrote a song, you know, piano and bass and singing and stuff, and we envisioned this whole electronic thing for it – it defiantly helps that we know what we, as artists, like and although it still may change we already have a sound base to rely on when writing new material.

Playback: What about personnel? How’d you meet the band?

Mark: I met Steve in residence. We used to listen to the Doors and get stoned together. Kevin was like the first friend I met in 1st year at Humber: just ran into him in a hall and we sort of just hung out and started jamming, and Juila we just kinda met later on through the program.

And Colin was in the band briefly and we met him through the same channels.

Playback: Yeah, how’d that all go down? Colin’s not with the band anymore, but he’s on the first album, correct?

Mark: Yep. He basically played lead guitar and we just became really inactive after the record came out. At that point he just started playing with a bunch of other bands, and the bands he plays in are awesome, and he’s more influenced by …a… heavy metal ….type ….scene….?

But yeah, we started playing again after the record came out and I was inviting him to rehearsals and whatnot and he just kinda said: “Look man, it’s been a while; I’m getting involved with a few other bands that are kinda taking off, so I hope you understand….”

And as a result of that we became a quartet again, which is what we were in the beginning and now the music is very synth oriented – as opposed to just layers of loud guitar, with some synth.

Playback: So, transitioning to more of a synth based sound – does that put more pressure on Steve to become a more focal member of the band?

Everybody plays a part.

The new album is really different in the way that it’s been written. For Giant Octopus I came to these guys with 11 completed songs and said, “this is the record” and nothing was really changed from the initial conception to how they ended up on the album. This one has been more like, I mean, I’m still coming in with the initial songs, or licks, or what-have-you, but the band as a whole defiantly has been giving more input as to how it all is being put together.

One thing that has certainly changed from Giant Octopus to the new album, and this may be the band itself maturing, is that we’ve probably done all we can do with the whole ‘vocal interplay’ thing. It’s been a staple of our “sound” for a while and I feel that the new album is probably going to stay away from that.

Playback: Man! That is one of my favorite parts of your sound.

I’ve actually got that a lot. I was really into it when we were first starting out, but I feel now that it’s lot more appropriate to give each vocalist a feature and focus the rest of the band on supporting that song. For better or worse, I think we’ve moved on.