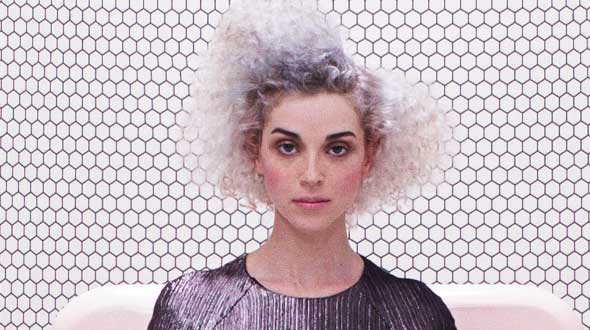 Now that her solo original material has evolved into sort of a Kraftwerk-meets-Bjork chamber rock, it’s hard to imagine the time that she toured with oft-subdued indie-darling Sufjan Stevens or donned tunics with The Polyphonic Spree.

The self-titled album, released today via Republic Records, deconstructs most things that we expect from indie rock today and re-brands the idea of what we are to expect from creative minds. This new album cuts no corners and almost refuses to be pop.

Whenever someone comes out with a new record, even if it hasn’t been more than 2 years since their last, it’s always good practice to see how far they’ve progressed since their last release. For St. Vincent, the jump in her creative voice is clearly astronomical:

THIS JUST IN: St. Vincent did an AMA last night as well – for those who are into that kinda thing you can read it here.

Download St. Vincent to your MUSICBox On-Demand via the PCM Online Music Catalog by following this link.