1980 Bob Marley was baptized at the Ethiopian Orthodox Church, Kingston, converting to a Christian Rastafarian and taking on the new name Berhane Selassie.

2012 A copyright infringement lawsuit filed by songwriter Guy Hobbs against Elton John and his songwriting partner Bernie Taupin over their hit song ‘Nikita’ was thrown out of court. The Judge ruled that both songs shared similar themes and phrases, but that these were prevalent in modern music.

1984 Prince played the first of seven nights at the Joe Louis Arena in Detroit, Michigan at the start of his 87-date North American Purple Rain tour. The outing marked the live debut of his new band The Revolution. 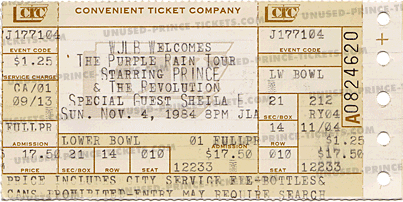 Lambchop | FLOTUS
There’s no questioning that this may be the calmest and most lush addition to the Lambchop catalog. But at a mere dozen records into their career we find the ever-changing group at their most adventurous. The lyrics, arrangements and songwriting from Kurt Wagner are still at their highest quality but it’s the vocal performance, especially as the album progresses, that begins to take on another dimension.

American Wrestlers | Goodbye Terrible Youth
This emotionally raw and personal album from Gary McClure is a restless, distortion-heavy great leap forward in sound. Still retaining the same building blocks that brought his listeners in in the first place, McClure takes earlier ventures and echos them again here. This should be turned up loud in a sweaty club somewhere.

Bon Jovi | This House Is Not For Sale
For many, the number 13 is an unlucky number, and it seems that for arena rockers Bon Jovi, their 13th studio album has been struck by the curse. Although Jon Bon and the gang had already taken a heavy nose-dive into MOR territory on their past few albums, This House Is Not For Sale, is actually different because, while the songs are still sounding bland and boringly wholesome, this time lead guitarist (and usual co-songwriter) Richie Sambora is nowhere to be found. Instead we have someone named Phil X stepping in who, despite his guitar chops, doesn’t bring whatever Sambora brought to the band. It also must be tough for a band that has been together for over 30 years, had HUGE hits, and has drifted this far away from what made people got nuts over them in the first place. Die-hard fans will always be listening, and with This House Is Not For Sale, they’ll be happy to have another album to add to their collection.