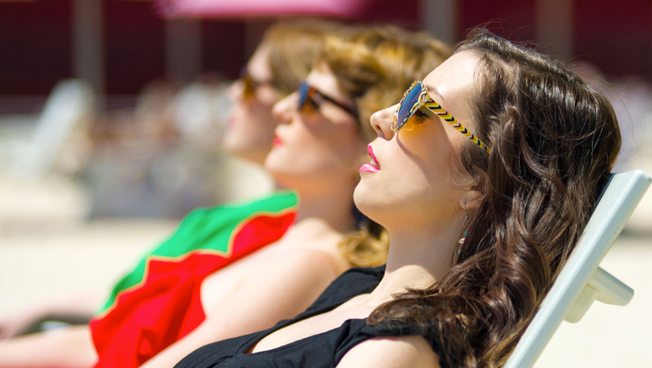 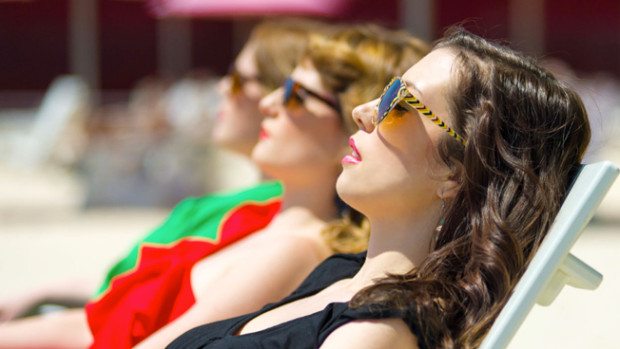 Donnie the Disco Commie, the first song by Alex, Maggie, and Lizzy, the 3 leading ladies of what was to become The Spandettes, was written in the basement of a Disco-communism themed party. Besides probably being the best party theme ever, what became of that song has developed into a finely tuned, disco-dance heavy mixture of soul, bossa, funk, reggae, and even calypso.

Years after the initial boozy writing session the girls have completely grown up – starting families, starting careers, and college seems like only a distant memory – however, it is clear from the first listen to their record, Sweet & Saccharine, that the tongue-in-cheek, sometimes ironic lyricism and love for music that initially brought these girls together in the first place still lingers. After a brief foray onto the Japanese and Mexican pop charts The Spandettes are finally ready to bring their album back home as they release their record to a North American audience tonight at Tattoo in Toronto.

I sat down with Lizzy Clarke, one-third of the act, to talk about the record on a wet and windy evening in Toronto’s west-end. Keeping to the tradition of the band, we first got adequately drunk.

Playback: You we’re big in Japan (sorry about the cliche), charting for a while, but this album wasn’t available in Canada – why did you wait to release it in North America?

Lizzy: Well, it was more succinctly Tokyo, but thankfully the success we had overseas really gave us a bunch of momentum to release it here and focus more on the record itself. I mean, these songs are close to 7 years old, and with the girls starting families, I can only imagine how difficult it is to focus on a project of this magnitude.

Playback: On top of raising a child – I can’t imagine…

Lizzy: Well, yeah – they were amazing women before they became mothers – but they are stellar human beings now. I simply do not understand how these ladies function as mothers and then turnaround and do the musician thing. I have no idea where they find the energy. Somehow they manage, and this relates to why we really weren’t pushing the record in Canada, we took a year and a half off and with the help of Do Right! we finished the record and got some decent exposure in Japan as Maggie and Alex “transitioned into motherhood”.

Although it was something that never really felt “real”, since Japan is so far away, the word of our success over there really pushed us to release this in Canada, especially since our friends, our family all wanted to hear this record, and they just couldn’t.

Playback: It must be nice to have that kind of success in a market that you really didn’t even really plan to go to.

Lizzy: You know how it is – you spend so much time working on your craft and it’s really just such a crap-shoot that when even the smallest amount of success comes back it’s almost like you can’t believe that it’s happening. I mean, it’s not a career maker by any stretch, but it’s these little tiny bits of success that make you look at what’s going on around you and sort of say, “Okay, maybe I can do this.”

We’ve got a really cool, professional group of people around us who have an insane skill level that transcends even what I’ve expected from not only this band, but my entire career. I’m just so blessed to work with everybody involved with this. So with the talent in the room we’re able to run a song in rehearsal and really start nit-picking at the small stuff – which translates into respect for the music.

Playback: Do you find that this nit-picking can become fruitless at a point; I mean, everybody wants their record to be perfect, but… nothing really ever is, right?

Lizzy: Oh my gosh – yeah. It’s the same reason that people don’t like looking at pictures of themselves, when you hear something, even if you know it’s only a work in progress, you start really going down this rabbit-hole that really starts to become more of a burden sometimes.

In all honesty, I don’t think I could ever be completely satisfied with something I’ve done artistically. Realistically, you just can’t get there, there is always room for improvement. It might be a sign of insanity, but I think it’s just this drive that makes you wanna push to that “next level” no matter where I’m at.

Lizzy: That’s true. I haven’t gotten to that point yet. But there is always going to be some way that, as an artist, we can improve, so nit-picking will always be a HUGE issue that will always hamper “progress” so to speak. There are points that you really have to consider “diminishing returns”, by thinking to yourself, “is it worth working this hard to try and get to a spot that I’m even sure is in the realm of my capabilities right now?”

Playback: That’s the struggle though, that’s the artistic “push”.

Lizzy: Yeah, but when you’re paying for studio time….

Lizzy: I’m just really lucky to be going through this journey with such amazing “teammates in music”. I mean, I cannot fathom how Alex and Maggie get the energy to do all the things they do with this band – these two really inspire me to really work though, not only personal problems that I might be going through, but to challenge myself to do more and not to worry about any of those “diminishing returns”

This whole thing would be impossible without their tireless work and dedication to music, all the while raising people who are going to be awesome people!

Playback: …and putting out an awesome record, right?

Lizzy: Haha! Yes. That too…