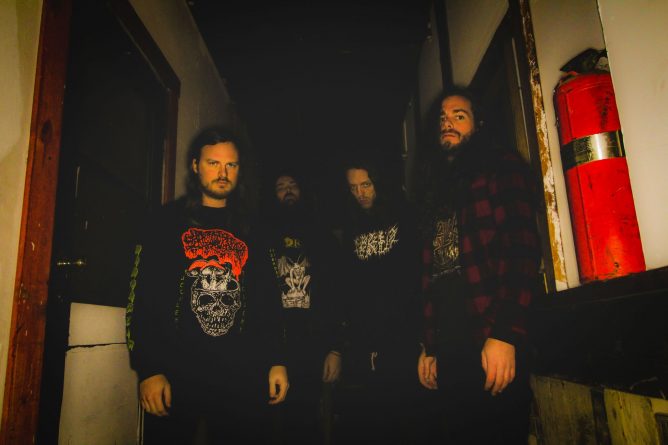 I don’t know whether Plague Years’ debut release comes out at a perfect or imperfect moment. Part of me says yes – we are, after all, in our plague years (the pluralization of “years” has me with goosebumps). Hopefully it’s just a “plague year”. What better soundtrack for a time when so many are angry or frustrated at our current state of affairs than a smack to the face of a heavy blend of thrash metal riffs meshed with hardcore punk ferocity and speed. This is an album that makes you want to punch through your computer mid-Zoom call or punt your neighbour’s homemade sourdough bread he keeps raving about like a football. It’s a cathartic frenzy – just like this year so far.

However, as a metal-head, hearing this record makes me long for the days of going to shows and throwing down in a mosh pit with my buddies. I was listening to the second track “Witness Hell” while mowing the lawn the other day and I instantly started mowing in a circle pit formation. It’s a death metal infused faster-than-hell banger that forces you to move. Before I knew it, I had mowed into the earth’s crust. It was hotter than having long hair at a metal show with no AC, and the bar is selling 8 dollar water bottles.

The album opens with the sounds of a helicopter seemingly touching down into the eye of the “circle of darkness” on the track “Play The Victim”. But once you hear that helicopter, what follows is akin to the blades of the helicopter chopping your head off (just like in George A. Romero’s Dawn of the Dead).

Promptly after this opening, the guitars and bass start chugging along like a roller-coaster ramping up to the top of a hill while the pounding drums of Mike Jurysta echo behind them. The track explodes into a tenacious combination of a lightning fast guitar riff and blast beats while Eric Lauder’s guitar squeals like a war cry. It’s like the roller-coaster erupted into flames once it got to the top of that hill.

“Play the Victim” is only a preview of things to come. “Paradox of Death” features a riff very reminiscent of Slayer’s “Seasons in the Abyss” before kicking into a high gear with the guttural vocals of Tim Engelhardt. Speaking of Engelhardt, his vocals are quite similar to The Great Southern Trendkill era Phil Anselmo – his talking parts especially. An example of this can be heard on “Eternal Fire”. The band sounds like they are performing on top of a hellscape on the track “Evil One” as Engelhardt yells “FEEL THE FIRE BURN”.

Speaking of metal predecessors, the band is often affectionately compared to the legendary Brazilian thrash metal/groove metal/death metal outfit Sepultura. This comparison is even more fitting with the release of Circle of Darkness because it was engineered by Arthur Rizk. Rizk worked on the most recent Cavalera Conspiracy album, Psychosis (2017) – the band that features the brothers Cavalera, founding members of Sepultura.

Perhaps the heaviest song on the album is “Incantation”. Lauder describes it as a song about “resurrecting the dead that were condemned by god. Corpses become masters of chaos, rising to become a part of hell’s army to destroy their land and all things divine”. He also agrees that “this is one of the hardest and most aggressive songs on the record, relentless with its speed in the beginning and crushing heaviness at the end.” We couldn’t agree more.

Overall, this is a contemporary crossover thrash masterpiece. It keeps the sub-genre fresh with a straight dose of metal certain to make you bang your head – through these uncertain times.

Circle of Darkness is out today on Entertainment One. Stream it on Spotify below: