I first met Julia when she played saxophone and sang backups in a band I was playing in at the time. They were pretty catching pop songs written by a mutual friend. 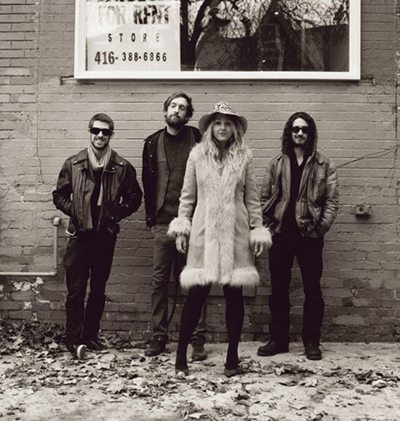 The pay was bad, during one of the gigs the bar actually lost its liquor license, and the band itself was short lived as the leader ended up heading back across the pond. However, during this time I couldn’t help but notice Julia’s amazing sense of creativity and sort of an “open doors” policy when it came to creative input and energy. Nothing was too weird, nothing was out of place.

Needless to say, this project did nothing to stifle her creativity. Vonelle, which has been together for longer than Julia can pinpoint, released their 2012 debut EP to limited distribution and attention from labels but it certainly hasn’t gotten lost to the lucky ears along Little Italy in Toronto. For about 4 or 5 months prior Julia jetting to the West Coast, Julia and Vonelle had been woo-ing a small club there with hard hitting, sun-soaked, Indie Pop with weekly shows that had been a hit with locals and tourists alike.

When I caught up with Julia after her first self-imposed exile on the West Coast I was relieved to learn that none of this had left her. Before and after this interview she has been travelling (sans Vonelle) to find different ways of expressing creative ideas and exploring the energy around this creative process. One of the things that we really struggled with during our conversation was how local scenes tend to differ from one another – the big city mentality of keeping to yourself versus the small town “we’re all in this together” vibe.

P: I listened to your EP again today – when exactly did it come out?

P: May 3rd, so that’s like a year and a couple months ago. How was the recording process?

J:  Recording was sweet – we did it at Humber. Um, it was really fun because we, kind of, recorded the music and then became a band

P: So it was one of those things, like, well you wrote all the music yes?

P: …and conceptualized the whole thing…

P: …but you recorded at the Humber Studios as the “Humber Recording Project”…?

J: Yeah, so it was, like, get all these songs together, and record, and it was really cool – and it was like….. okay, now let’s be a band! We already have this sweet recording, which is sweet because most bands have to work so long before they get a recording, so we kinda had a jump start that way.

So I had the band, and we switched drummers – Kevin started playing with us instead of Galen and… it was really amazing, um… It was fun when we actually made the CD, ya know? It wasn’t just a Humber project anymore.  But now that it like, is a ‘thing’, I kinda try to veer away from the fact that it was a Humber thing to begin with.

P: It’s odd; not a lot of people really like that Humber association anymore.

J: I found that it was more a ‘big deal’ when I was at Humber, and when 4 year came around I felt like, “I don’t want to live in this Humber bubble. Everybody in the Toronto music scene knows nothing about Humber and are doing their own thing completely independent of whatever is coming out of Humber”. So I find that a lot of people coming out of that program get stuck in this weird bubble where they have this attitude that they’re better than everyone else – and I really didn’t want to be associated with that.

But now, I feel that I’m just so far beyond that it doesn’t really matter anymore.

J: Yeah. For sure Humber was a sweet way to meet people. I mean, I met everybody in my bandmates at Humber and a large majority of my friends and it totally was this enriching life experience – I don’t know.. it might just be me. I feel like there might be some sort of stigma attached to it.

P: Well there is that stigma. Just like I’m sure there is a stigma related to bands that come out of UofT or York that we’re not aware of simply due to the fact that we didn’t go there. I mean, when BadBadNotGood ripped the program publically last year everybody was like, “Fuck those guys, they don’t know what they were talking about!”. It’s odd – everybody gets really defensive when anybody talks shit about Humber (or their alma mater in general) but then when you get a group of Humber grads together everybody’s like, “Man, fuck Humber”.

P: Okay – enough about that. Tell me more about the making of the album.

J: Well, I was living with Tristan Henderson at the time and having him work on the album was really great and then Sam (Ibbet) mastered it.

My plan actually right now is to apply for a bunch of grants so we get the finances to work toward a second album, and then pick Sam up again to work on it.

P: But you’re going to the west coast for a while first, right?

J: I am, but only for a little short time?

P: Again? You just got back from the West Coast.

J: Well, this time I’m flying into Kelona and then driving down the coast to California.

I’m going honestly to just check it out. After driving all across the country last month and seeing all of these small towns and seeing the difference between the “big cities” I’m like “whoa! This is HUUUGE difference”!

Regardless, I just want to go “out there” and see what’s going on somewhere else. I mean, there are a lot of bands out of San Francisco that I really like and I just want to find out what the attitude is out there – in their bubble, so to speak. What is it like out there to “be in a band”? I mean, I feel that Toronto, specifically, there is a high compete level between players and bands themselves where it sort of creates a negative environment for growth as a culture.

J: I don’t know. I want to find this out because I feel that that is defiantly the way it is in Toronto and what we’ve been doing recently is just putting on a showcase all of our friends.

Let me put it this way: you know how most shows in Toronto go – there’s a $10 cover, there’s 5 bands on the bill and nobody gives a shit about anybody that is not the band they went to see.

I want to create a “show”, an event, a night, a musical experience where the opening band matters as much as the headliner and they’re playing because we want you to listen to them. We think they’re great and we want to show you.

The way we had to do it with the showcase we were doing was: a set of Vonelle, a set of a guest, and then another set of Vonelle so people would stay and listen to the whole thing and it was really working nicely, but I wanted to start integrating all these different artistic people together – people that do light design, visual artists, cooks, dancers, cocktail bartenders; any creative medium just coming together and doing their thing, something where the night is just more than a band on a stage and beer.

One thing I’ve noticed about Toronto is that very few people want to talk or smile at each other – it seems that everybody is trying to prove themselves.

P: What are they trying to prove to each other?

J: I don’t know. It boils down to, if person 1 comes across pe

rson 2 and thinks they’re interesting they’ll just stop and stare as opposed to, say, going up and saying “hello.”

P: Is that a self-defense mechanism or is that just a social qualm that people just ‘have’ in the City?

J: I don’t know – I guess it comes down to the individual and how those individuals connect as a part of the collective that is Toronto (or whatever city they happen to be in).

I mean, Toronto is just its own little bubble in this world of larger and smaller bubbles. I guess it’s everybody’s responsibility within this world to pop these bubbles and make everybody say ‘hi’ to one another – maybe not even saying ‘hi’, maybe even just smiling.

P: Is that something you want your music and your shows to accomplish?

J: Absolutely. It’s all about creating an environment that everyone can enjoy being a part of.