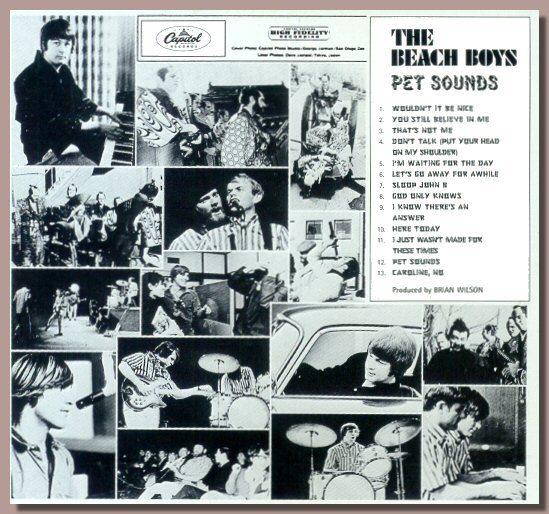 In the early 60’s, the Beach Boys had a run of hits that played off the Surf-Pop sounds of groups like Jan and Dean.  They harmonized about the feel good staples of middle class Pop-Rock; girls, cars, surfing, girls IN cars, and high school glory.  By 1965, the creative force behind the band, Brian Wilson, had quit touring to really focus on writing and recording.  Around that time, it was suggested that the Boys should record and perform the traditional Caribbean folk song ‘Sloop John B’.  Wilson spent months crafting and polishing the vocals of this one track.  He also started composing other tracks in the hopes of having something for the record company in time for Christmas in ’65.  One of those tracks was ‘Don’t Talk (Put Your Head On My Shoulder)’.  Wilson was maturing as a composer, and these two tracks, though they never made it out for Holiday Shopping, were something special; they would go on to become part of what would be his masterpiece – the album Pet Sounds.

During the writing and recording of Pet Sounds, The Beatles released Rubber Soul, which Wilson became enthralled with.

“It felt like it all belonged together. Rubber Soul was a collection of songs…that somehow went together like no album ever made before, and I was very impressed.  I said, “That’s it. I really am challenged to do a great album.”

Wilson set out, both inspired and competitive, to create something on that level – a complete album. Borrowing from Phil Spector’s ‘Wall of Sound’, he became almost obsessed with the production of the record.  Like the album, the songs themselves became much greater than the sum of their parts.  Where other bands might use a rhythm and lead guitar, Wilson used multiple guitar and keyboard parts, each of them often very simple, but when woven together with intricate bass lines (many from session legend Carol Kaye), distinct percussion, as well as horns, strings, and even a theremin (!), they took on an almost classical feel.  Wilson truly was composing 3 minute orchestral pieces, within the Pop spectrum.  Lyricist Tony Asher provided the words that encompassed the feel of Wilson’s music, and the results spoke for themselves.  Every song on the album could stand on its own as a single, yet they were a far cry from previous Beach Boys hits ‘Surfin’ USA’ or ‘Little Deuce Coupe’.

Musicians at the time and ever since have cited Pet Sounds as a source of inspiration.  Pink Floyd, Cream, The Who, Elton John, R.E.M., Radiohead, and of course, The Beatles have all claimed to have drawn from Wilson’s creation.  Sir Paul McCartney has often referred to one of Pet Sounds many highlights, ‘God Only Knows’, as his favorite song of all time, and that the album itself was the major influence on Sgt. Pepper’s Lonely Hearts Club Band.  Pretty good advocate, if you ask me.

Released on this day in 1966, Pet Sounds remains a classic.  In an era where the single has come back to once again dominate music; I’d like to salute the endangered species: the album. And while it’s hard to pick just one song, I’ll defer to Sir Paul’s taste.  Happy Birthday, Pet Sounds.