Dancing is Not A Crime! 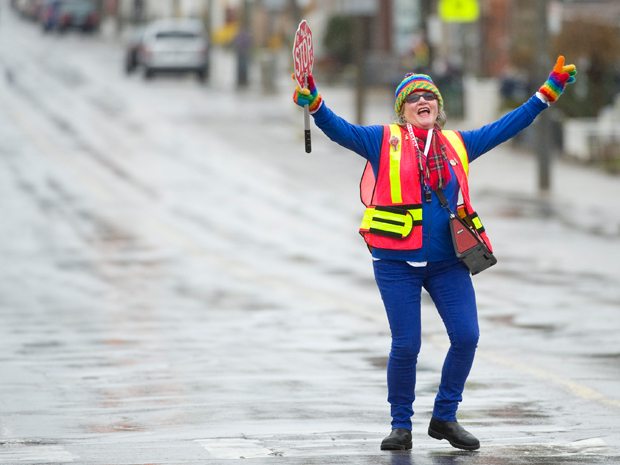 File this one under: “Really?!”

Last week Kathleen Byers was suspended from her duties as a cross-guard in Toronto’s west end, a job she had worked for over a decade, for using her uniform for “a purpose other than prescribed in Toronto Police Service rules and procedures”.

Kathleen Byers has been a beloved part of this community, known largely for her dance moves while safely shepherding children across busy rush-hour intersections. Naturally, she took her job and her lighthearted nature as a point of personal pride, and by dancing her way across the street, made everyone around her a little more chipper in the mornings.

However, and at the risk of having my town sound like Bomont, Utah (look it up), the Toronto Police Service, the organization charged with employing and overseeing crossing guards around the City of Toronto, had as recently as last year warned her to “stop dancing and playing music while she worked” because it “created a public safety hazard and put pedestrians’ lives at risk”. In order to keep her job (and keep it fun) Kathleen decided to turn the music down a bit and “make her dancing look more like casual exercise”, stating “God forbid I should have any rhythm”.

The final straw, that thing that TPS could not abide by? This music video by Toronto indie act, Born Ruffians:

“I’ve never had a child hurt in 10 and a half years. The thing I’m very proud of is I’ve never sat on a chair, read a book, played with a phone, leaned against a fence and waved the kids across. I’ve always gone on the road, watched [traffic] to a T.”

“I’m as safe as they can be. I just happen to move to the beat of a different drummer maybe…”

My town, sure, has had it’s share of embarrassing moments recently, but personally this one takes the cake.