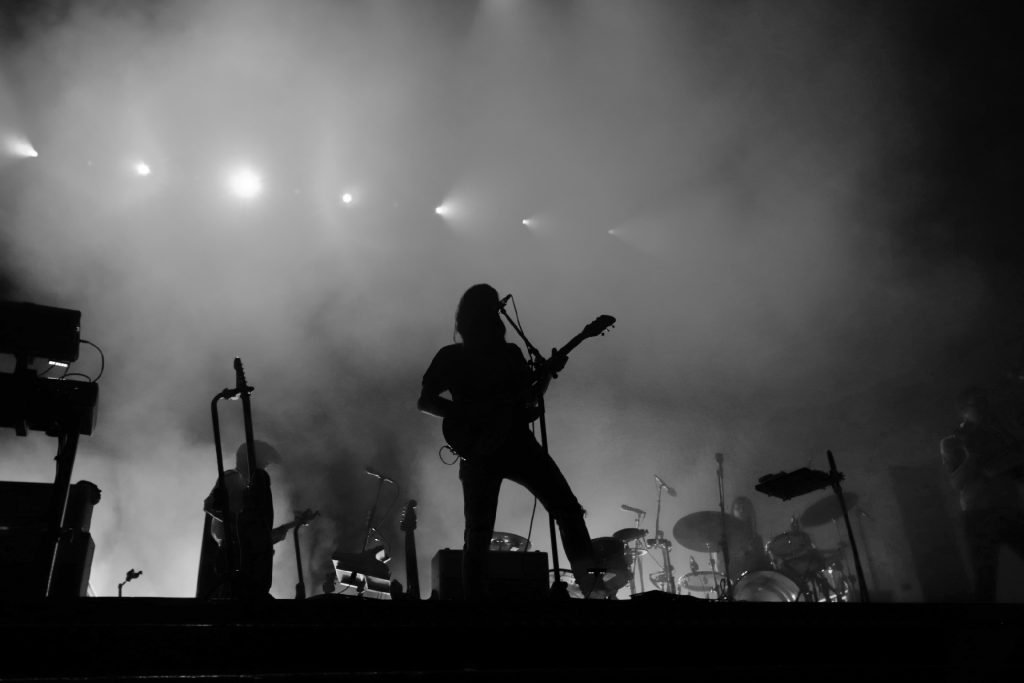 Tame Impala dazzled Toronto fans back to life at Budweiser Stage on Friday night after a 3-year absence from the city and two stunning new singles.

When Tame Impala stepped onto Budweiser Stage amid smoke and coloured clouds on Friday night, a sense of expectation lay thick in the air above the crowd of sixteen thousand twenty-somethings. Returning from a four-year absence on a foundation of two new and spectacular singles, ‘Patience’ and ‘Borderline,’ Kevin Parker and company faced well beyond an audience simply waiting for more.

With only three albums’ worth of material over nine years, Tame Impala’s forthcoming album seems poised to meet their lofty and somewhat unique standard among alternative bands in a hip-hop era. While their compatriots The Black Keys and The Raconteurs, who recently released albums falling short of their names, have arguably fallen by the wayside, Tame Impala’s return to Toronto seemed an opportunity – a moment to remind their glittered, floating, festival-ready audience of the fun bands like theirs offered only a few years ago. On their current 40-date tour, Tame Impala invite their followers to step into a world of psychedelic imagery and piercing lasers and recall just who they were in the summers of 2015 and 2013

And while their live approach remains consistent, Friday night at Budweiser Stage was in no way a simple nostalgia trip. With each subsonic baseline that reverberated under your feet and each feather-light chorus lifting the crowd, already feeling good, even higher, the Australians asserted themselves not only as guitar and synth music still worth hearing, but as a defining group for the festival-goers of yesterday and tomorrow.

Where Tame Impala thrive in a musical climate of gimmicks, eye-grabbing features, and early choruses designed for the streaming age, is in placing both the sonics and visuals of their presentation at the fore while humbly receding into silhouettes and shrouds of soft colour. With the continuous formation of smoke clouds beset with multicoloured hue and pierced by lasers enmeshing the audience in a world of blissful polychrome, Parker and his cohort often took a secondary role to the sensory experience. The centerpiece of the production, a massive halo-cum-spacecraft, hung and shifted over the stage throughout, casting Parker, all shadow and hair, as some holographic messiah from the future.

Throughout the 90-minute set, the band remained unwaveringly composed and coordinated through meticulous arrangements, Parker remaining firmly behind guitar and microphone with interludes of stage-pacing and almost incongruously humble banter. Two brief intermissions left the buzzed millennial crowd to marvel at the descending spacecraft in flashes of cotton candy lightning and jarring crackle.

It was in these moments that one might look around, observing the horde of those who were there at this same show four and six years prior – all festival fashion and flowers and muscle. So little had changed from those summers, and yet so much had changed. ‘The Less I Know The Better,’ ‘Yes I’m Changing,’ ‘Feels Like We Only Go Backwards,’ and ‘New Person, Same Old Mistakes,’ titles once so innocuous in the haze of summers past, now held new meaning, their weight palpable. After four years – a break long enough for any band to be left chasing popular music’s evolution – Tame Impala seemed to wrestle their audience from stasis, their gift more coveted now than ever.