Home › Editorial › Music, Culture & Everything › Colin Stetson and the Art of Virtuosity

Colin Stetson and the Art of Virtuosity 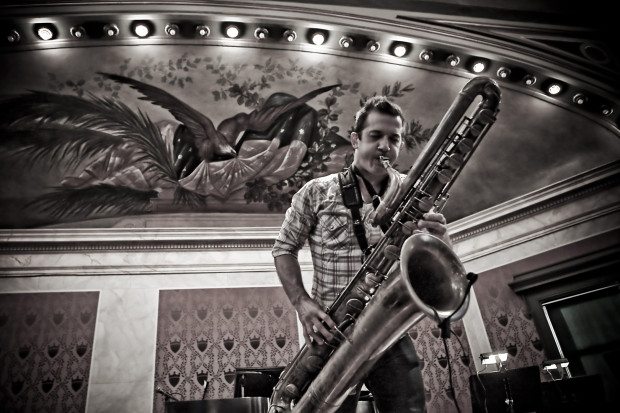 Toronto’s abstract and experimental music festival Wavelength opens for 2014 tomorrow with, as always, a stellar line-up of bands and artists from all over North America. This festival spans many months with performances ranging from weird noise rock to ambient looped solo artists to major indie pop and electronica acts.Although the April dates have yet to be announced (and it is almost certain that they will be filled with a fairly recognizable act), the clear headliner of the event so far is Colin Stetson – he is performing this Saturday at the Polish Combatants Hall on Beverly Street.

Stetson, who throughout his career has performed with the likes of, Tom Waits, Arcade Fire, TV on the Radio, Feist, Bon Iver, David Byrne, The National, and LCD Soundsystem, has clearly blazed a new trail when it comes to the aspirations of your average virtuosic multi-instrumentalist. Besides being a multireedist (arguably one of the coolest things to ever witness live) he has taken the experience and knowledge gained from his education at the University of Michigan School of Music, his current immersion in a blossoming Montreal art-music scene, and the shared experience of his various collaborators and developed a sound that is impossible to recreate.

In 2008, Stetson redefined the idea of “playing the saxophone” by releasing his first solo record New History Warfare, Vol. 1. The record received tremendous critical acclaim, even though it was largely ignored in mainstream Jazz and Pop circles. Despite this snub, Stetson’s second offering, New History Warfare Vol. 2: Judges landed him on the 2011 Polaris Prize shortlist and solidified his place in the world of art-music. Coincidentally, the album which took home top prize that year, Arcade Fire’s The Suburbs, featured Stetson himself as a performer and collaborator.

Currently Stetson is onto his third solo offering, aptly titled New History Warfare Vol. 3: To See More Light, which Pitchfork has dubbed “A hugely impressive achievement…” and described it as “a sound that could only come from one person on earth”.

A lot can be said about the sound, however it is truly incredible that this man can create this sound without any aid of over-dubbing and all in single-takes. We are watching the future of what it means to be a multi-instrumentalist – it’s only a matter of time before concert halls and symphony’s are calling on Stetson for performances and residencies – and it’ll cost me a lot more than $20 to see him play.

Without a doubt Stetson’s music needs to be heard to be believed.

Download the Colin Stetson to your MUSICBox On-Demand via the PCM Online Music Catalog by following this link.