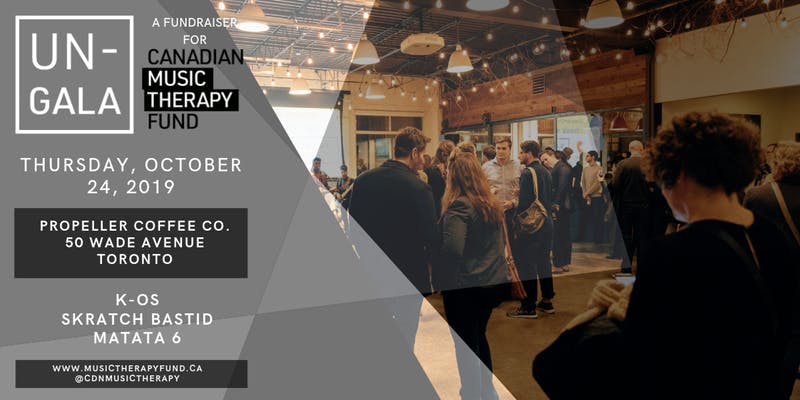 RX Music had the pleasure of attending the Canadian Music Therapy Fund’s second annual ‘Un-Gala,’ a warm and casual celebration of music’s ability to heal, on October 24. The fund and the Music Therapy Centre’s mission is one worthy of the unbridled celebration it received, seeking to promote and develop music therapy and research, as well as making it more widely accessible to those who might benefit, namely those with Alzheimer’s, varying degrees of Autism, and brain injuries, among others. It’s an imperative and noble objective as music therapy continues to vie for wider recognition, implementation, and funding.

The evening, held at Propeller Coffee Co., began with Music Therapist Emily Stegweit describing her work with two patients: an autistic man discovering his rich baritone as a mode of expression when words fail; a 90-year-old woman in the late stages of Alzheimer’s, unable to recognize or remember her husband and name, singing songs of her youth with astounding accuracy, all the while using a shaker in perfect time. It was in this touching moment that the importance of CMTF’s work resonated throughout.

Labeled an ‘Un-gala’ for its casual and familial nature, the room immediately erupted into a dance party with a performance by Canadian Hip-Hop legend K-OS, followed by DJ wizard Skratch Bastid pumping one masterful mash-up after another. Between songs, drinks, and Mexican food, donors bid on mouth-watering silent auction items courtesy of sponsors Sony Music, RX Music, Slaight Communications, Music Canada, Long & McQuade, Sonic Boom, Red Bull, Millstreet, and Bacardi, among others. Sponsors’ and attendees’ contributions go toward funding new music therapy programs in Canadian hospitals and where therapists deem there is a need for the service. “It’s an honour to support CMTF,” said one attendee about the importance of fostering music therapy programs across Canada. “The work they do as practitioners and kind people is invaluable. The Canadian Music Therapy Fund touches lives and hearts in ways that are relevant, purposeful, and most impactful. Music connects. Music brings joy. Music heals.”

To donate to the Canadian Music Therapy Fund, and for more information, click here.