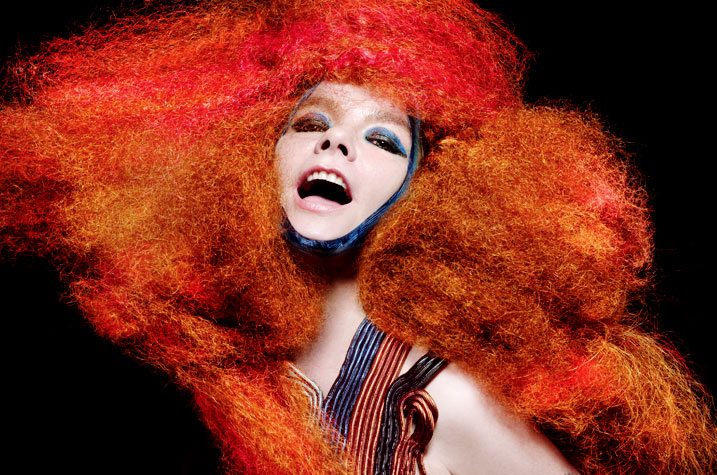 Today, November 21st, 2013, is Bjork’s birthday.  To celebrate, we’re going to look back at the career of one of the most expressive, talented, artistic and influential artists of the late 20th century.

Coincidentally, Bjork’s first real foray into pop culture was the surprise hit “Ammæli” released with her band The Sugarcubes, which actually translates to “Birthday” in Icelandic.
[youtube id=”F6hGc7S8d88″ width=”624″ height=”360″]
After signing a deal with One Little Indian records (the same label Bjork is still signed to today), The Sugarcubes inked a distribution deal with Elektra Records and recorded their 1988 debut Life’s Too Good.  This record propelled the group to a level of fame previously unmatched by any other Icelandic group.

In 1993, Bjork left The Sugarcubes – on good terms – and moved to London to pursue a solo career. Working with producer Nelle Hooper she released her first international solo hit, “Human Behaviour”.
[youtube id=”KDbPYoaAiyc” width=”624″ height=”360″]
It was this song, along with the debut of her album “Debut”, which brought about a maelstrom of success for this unassuming yet otherworldly artist.

One thing Bjork struggled with, especially during the early years of her solo career, was her image.  However, with the release of “Homogneic”,  Bjork shed her sweet,  small town, “pixie-like” image and showed the world how versatile she was.

The 2000’s saw a plethora of releases and successes as Bjork gained worldwide respect and admiration for her compositions, arrangements and vocal talents.  NPR put Bjork on their list of “50 Great Voices”, MTV placed her at number 8 on their countdown of “22 Greatest Voices in Music”, and Rolling Stone praised her voice for being “unique, fresh and extremely versatile, fitting and being influenced by a wide range of influences and genres”.

Bjork’s most recent release “Biophillia” has again sent her into an almost completely new direction – combining elements of nature and electronic music, in my personal opinion this may be her best work.
[youtube id=”MvaEmPQnbWk” width=”624″ height=”360″]
The problem with comparing Bjork’s work over the course of her career is that there are very few comparable points. Bjork consistently finds new ways of expression through sound and light and here’s to hoping that she continues on her ground-breaking journey for many years to come!