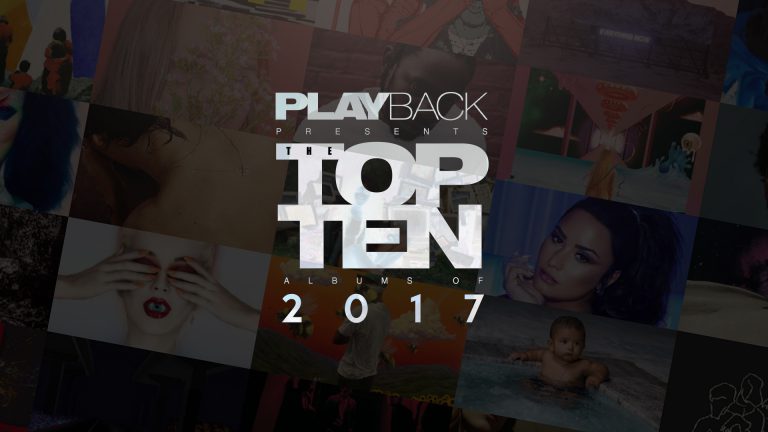 2017: the terrible sequel to the horrendous 2016 is finally complete. This fact relies on the assumption that the heat-death of the universe won’t occur in the next two weeks, but assuming that nuclear war doesn’t take place, we’ve made it.

As tradition, you’ll find the absolute best albums of 2017 as selected by the programmers and consultants at Playback and RXMusic below, sorted this year into categories.

Moving through songs focused on love and life using her characteristic tinny style and songwriting style, she echoes her previous work while capturing the evolution of her sound over time. This album, essentially a collection of B-sides and edit room rejects from previous projects, shows he versatility and ability to create a stirring and emotionally exploratory LP.

Queens of the Stone Age | Villains

By far the most danceable offering of their storied career as a group, the seventh LP from the California-natives is certainly slicker, tidier, and yes even a little more pop, but it still remains heavy, ambicious and unquestionably weird. Villains is Queens at the top of their game. Dark, seductive, garish and well-crafted, this album may have proven to the masses a critics alike that there is still a place for rock music in today’s mainstream.

Honorable Mentions
The Afghan Whigs | In Spades
Royal Blood | How Did We Get So Dark?

There’s a big reliance on guest vocalists on this record that certainly adds to the cache and appeal to this record, but the true triumph of this LP comes in the resilience of the original artistic voice. These productions have always been cool and clean while still being patient and detail oriented. This album is the representative sound of an artist regaining perspective after a devastating setback, and while it’s easy to drift away to the resulting music, the album retains a laser focus.

There wasn’t much that SZA didn’t absolutely nail with CTRL. Although admitting in interviews that she really has no idea what she’s doing when it comes to actually “being an artist”, this album doesn’t suggest this in any way. Rather it shows someone with novel prose and delivery who uses these tools to explore music in ways that, even if it’s borrowed, sounds brand new again. This album solidifies SZA into the consciousness of the mainstream while exploring the full range of her voice as an artist.

Chris Stapleton | From A Room: Volume 1

Thematically and sonically focused, From A Room: Volume 1 builds on the successes of Chris Stapleton’s Grammy-winning debut through a similar blend of songwriting smarts and soulful engagement. Altogether this LP provides a counterpoint to the Southern outlaw meets Nashville hit machine artistry that some might have expected Stapleton to embrace. It’s refined craftmanship hammers home Stapleton’s abilities as a singer and songwriter.

In complete lock-step with the insanity of the current state of the world, St Vincent showed with MASSEDUCTION that she can be just as eyebrow-raisingly absurd as the world around her – in absolutely amazing way. An astonishingly remarkable record this was a contender for album of the year at first listen by creating this Narnia-like universe that undercuts the traditional pop album, the very genre in which it fits so perfectly. This album defies critique as a critic is sucker-punched over and over with an overload of musical ideas.

A brooding, grimy thing that stands as a unique and nightmarish account of what it would sound like to completely lose control The OOZ is strange scraps of brain stewed into something unrecognizable and delicious. Created here is something brutalist and beautiful; and nothing short of a masterpiece. Clearly this is another undoubtedly thought-provoking entry to into King Krule’s discography and another trophy on the mantle of Britain’s most exciting and challenging young artists.

Margo Price | All American Made

This provocative, charismatic and endearing piece of song-craft seems to codify what those in the Counrty scene have been saying for a while now: Margo Price is a country music superstar in the making. Price expands her musical horizons past the three-chord cliche on All American Made and develops her own voice into something stronger and more confident than her ragged and wiley debut. She had a little more time and money to burn on production with this one, and it really shows. But given the full force of the country music machine behind her it’s only a matter of time before she reinvents her own classic sound.

An extremely compelling record, Lana Del Rey’s fouth offering demonstrates her wit, strength and sorrow over it’s incredible 71 minute runtime. Her innate ability to magnify emotional devastation is amplied over the albums 16 tracks making the sheer length of the record play to it’s own advantage. Mixing vintage pop with hip hop, Lana Del Rey sets herself apart, once again, from her contemporaries.

This was by far the most eclectic you’re ever going to hear The xx. Its ambition and multiple dimensions expands the groups sonic reach and stretches it’s sound all the way to the back of the room. As Entertainment Weekly put it when the album came out (almost a year ago now), this is “the sound of the xx hitting the caps-lock key”.

Still one of the most consistently intriguing projects of the past 20 years, this is most likely the most vibrant and consistently engaging Gorillaz album yet. This vibrant record paints a picture of the near future so vivid that it seems convincingly real. The lawless, world-altering scenario that is presented is not a poorly attended inauguration but a massive, cross-genre party. A very worthy addition to a great catalog of cartoon-record making.

Julie Byrne | Not Even Happiness

Every song on this record is Julie Byrne making peace with her own restlessness – the result is a record that’s concerned about faith, death, and the metaphysical. It’s really intense, heady stuff but it remains grounded with vignettes of everyday activities. Listening to this record reminds the listener of being wrapped up in a blanket as a child; it gives you conform and more than a little reassurance, whatever the future may have in store.

A runaway favorite for album of the year upon it’s release (see more about that below), groundbreaking records are almost routine for Kendrick at this point. Countless rappers claim to have transended the game, Kendrick Lamar actually does.

Wolf Alice | Visions of a Life

Completely discarding the idea that the second album is something hard to pull off, Wolf Alice turned out a gorgeously twisted beast that keeps the group on the path to be Britian’s best band. There’s no wasted effort on these 12 tracks – every word, every note, every beat and effect counts. From song to song the album flows almost flawlessly with no low points to speak of making this record one of the most captivating of the year.

Proving that great songwriting never really goes out of style, Alvvays have ended 2017 in a league all of their own. Alvvays is a perfect mid-summer’s day, and while Antisocialites may be a cloud rolling through, at least it’s the summer time.

Insanely introspective without being too indulgent, honest and brave and full of brilliant songs Lorde has brought forward lyrics and songs that we’re still chewing over months after it’s initial release. On Melodrama, Lorde confirms her uncanny ability to drill down so precisely on grand emotional themes that would incapacitate lesser songwriters. Getting over a bad breakup isn’t new territory for pop music, but it’s delivered in Melodrama with an honesty and energy that is uniquely her own.

Technically not an album but a self-styled ‘playlist’, the work as a whole flows extremely well. One of the greatest aspects of More Life is that it lets you pick out your favourite aspect of Drake – select your favourite version and you’ve got a handful of songs within ear’s reach. 22 songs is a big challenge and a serious commitment to listen to from front to back, and might even be his worst overall output, as it’s more of a collection of totally atomized songs and ideas – meaning that it’s probably more of a playlist after all.

This album absolutely shreds. Sheer Mag, every single day, gives you everything they’ve got. Be it on stage or via this record, this socially conscious, sexually confident rock’n’roll with nods to pub rock, punk, funk, blues and 80s indie is greater than the sum of it’s parts. The energy, desire and cool that any great rock band must have is emanating from this group. The album itself seems like a celebration which is exactly why we’re celebrating it and Sheer Mag here.

Warm, buttery and lovingly produced – Thundercat created, by skirting around the edges of darkness, created a moody magnificent, endlessly replayable record. It took a lot of guts to employ the likes of Michael McDonald and Kenny Loggins on the same track, as well as a litany of others, but his style and playing is so uniquely his own that Thundercat was able to fit his collaborators into his style and not the other way around. Drunk is full-bodied, funny and meaningful all at once, while Thundercat presents his extensive musical interests in an effortlessly relatable sound.

An amazing 12 albums into his career Dan Bejar may have had his best to date. ken is subtle and a masterpiece that brings out emotion and beauty for a cord that truly feels sublime. Regardless of one’s first-take evaluations, repetition has inevitably drawn listeners closer to this underrated gem.

Although they fall short of Donald Glover’s assertion that Migos is “the Beatles of their generation,” there’s an undeniable energy and self-assuredness that seeps from their persona into their music. This, combined with their gift for catchy hooks and melodies, unique flows, incredible group chemistry and phenomenal one-liners creates a rare work which showcases Migos at the top of their artistry. And although “Despisito” will eventually be lost to the bowels of terrible songs we once listened to (looking at you “Mambo No. 5”) “Bad & Bougee” will go down as a classic for years to come.

Regardless of category as voted by the programming team:

Without question the runaway winner of the best album of the year the moment it was released. It’s hints of psychedelic soul combined with the sharp storytelling, luscious harmonies and tight pack of thoughts, anxieties and anecdotes he fit into this record shows Kendrick bringing forth yet another instant classic. Every track can be viewed as a piece of art in it’s own right while the album as a whole shows the world what it looks like from Kendrick’s point of view; high atop the mountain of greatness – not looking down – but looking into himself – at looking at the future all-time great in full command of his powers.