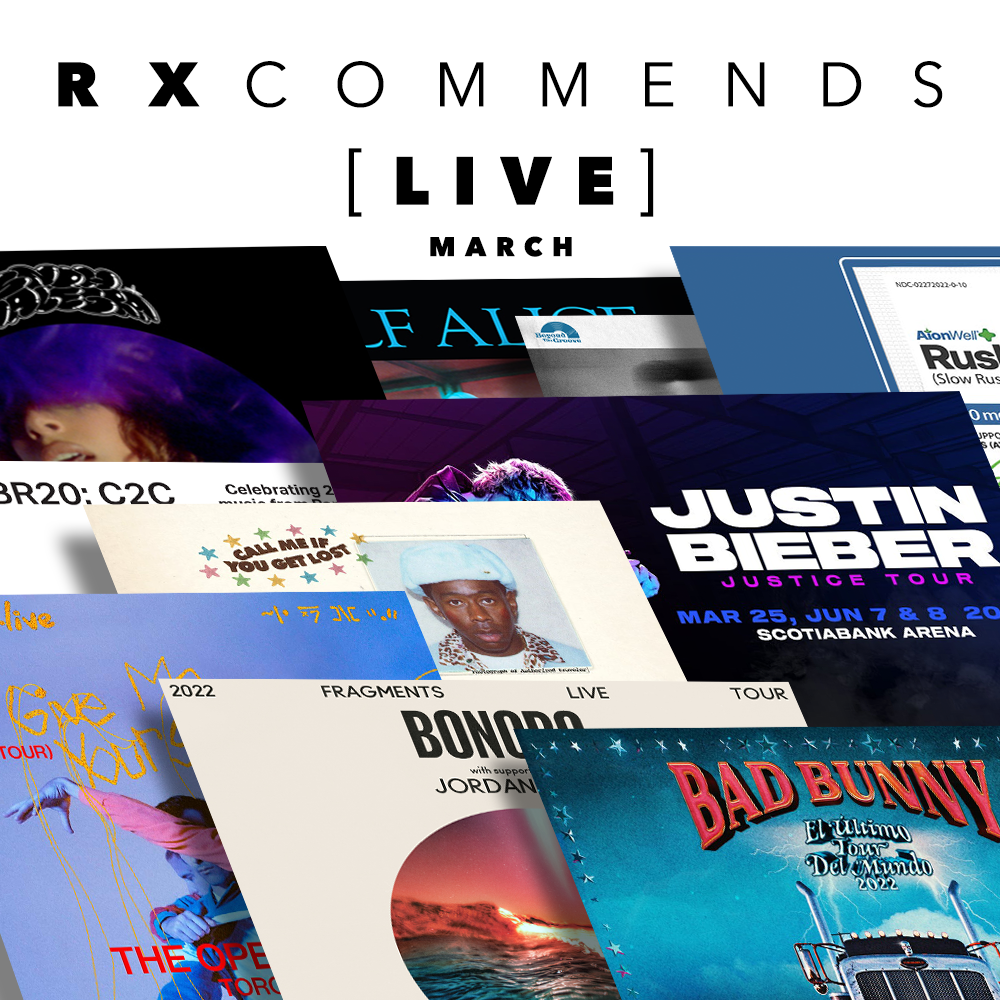 Spring is just around the corner! As we wait for the warm weather, don’t miss out on these exciting concerts by some of your favourite artists!

Here is a curated playlist with music from the featured artists for you to enjoy as you browse through the events:

PBR20: C2C 🍁  (virtual & in-person)  | Mixed Genre
“..we are proud to announce PBR20: C2C – a three day festival featuring your favourite PBR artists, with shows in Toronto, Vancouver, Halifax, and entirely online. That’s right – we’ve partnered with Side Door Access so you can be in three places at once; with one wristband, you can check out the lineup in your own city and tune in to livestreams of all the other shows too. ”
Saturday, March 5th, 2022 – 6PM ET
Cost: $25+
Tickets

Bonobo (in-person)  | Electronica
“He debuted with a trip hop aesthetic, and has since explored more upbeat approaches as well as jazz and world music influences. His tranquil electronic sound incorporates the use of organic instrumentation, and is recreated by a full band in live performances.”
Wednesday, March 9th, 2022 – 6:30PM ET
Cost: $45+
Tickets

Tyler, The Creator (in-person)  | Hip-Hop
“Okonma’s music has been variously considered alternative hip hop, bedroom pop, jazz rap, R&B, and neo soul, while his earlier music was considered horrorcore. Over the years, his style of production has progressed from gritty and dark in early projects to a jazzy and soulful approach with the albums Cherry Bomb, Flower Boy, Igor, and Call Me If You Get Lost.”
Friday, March 11th, 2022 – 7PM ET
Cost: $142+
Tickets

Half Alive (in-person)  | Indie, Alternative
“The band’s musical style has been described as indie pop, pop, alternative rock, dance-pop, electronic rock and electropop, and further incorporates elements of R&B, funk and soul. The band have explained that they enjoy experimenting with numerous genres as well as sounds from 1960’s, 70’s and contemporary music.”
Saturday, March 12th, 2022 – 7:00PM ET
Cost: $35
Tickets

Bad Bunny (in-person)  | Latin, Reggaeton
“His music is often defined as Latin trap and reggaeton, but he has incorporated various other genres into his music, including rock, bachata, and soul. He is also known for his deep, slurred vocal style and his eclectic fashion sense.”
Monday, March 14th, 2022 – 7PM ET
Cost: $152+
Tickets

Wolf Alice (in-person)  | Indie, Alternative
“Wolf Alice have long been championed as the best band in Britain. Before they released their debut album My Love Is Cool in 2015, the London-based four-piece were being touted as a future festival headliner (something they achieved at last year’s Latitude Festival) and they have impressed more and more with each release.”
Tuesday, March 29th, 2022 – 7:30PM ET
Cost: $25+
Tickets

Tyler, The Creator – Live at Lollapalooza 2021