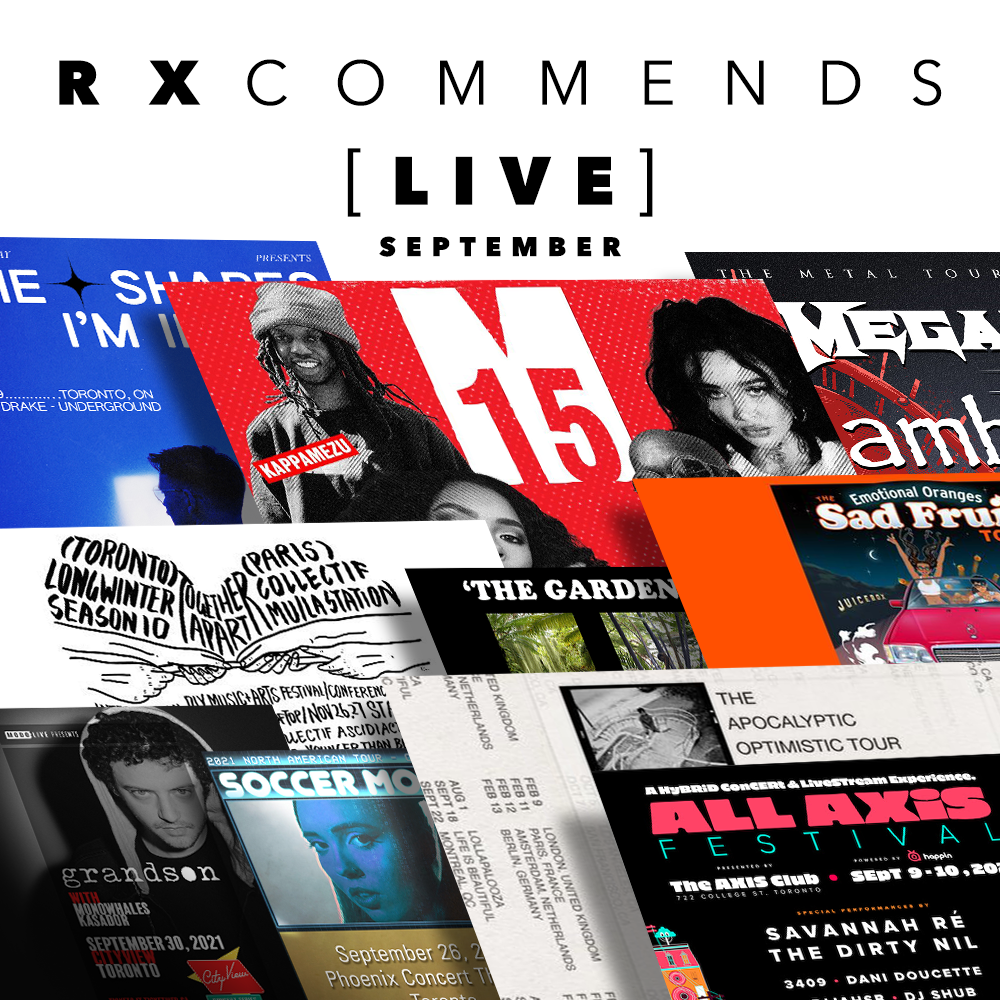 Summer may be coming to an end, but live concerts certainly aren’t! Don’t miss these virtual, drive-in and in-person concerts by some of your favourite artists, as well as notable emerging artists for your discovery. We’ve curated a playlist with music from the featured artists for you to enjoy as you browse through the events:

Goth Babe (virtual)  | Indie Rock
“‘Passing Through’ is a new short film & live stream music series from Goth Babe which documents his life on the road. Amidst his current 6-month road trip the series will include stops at major music festivals, surf trips and camping stops with his dog, Sadie. The first stop of the series is California beach town “Encinitas” posted along the cliffs for an acoustic performance and tour of his camper.”
Wednesday, September 1st, 2021 – 9PM EDT
Cost: $12+
Tickets

Moon King 🍁  (in-person)  | Synth-pop
“A 2016 move to Detroit and immersion in that city’s vibrant dance music and DJ culture began to influence his own recordings, and a collection of new material found its way back to Montreal label Arbutus Records (TOPS, Sean Nicholas Savage), who offered to release it.”
Friday, September 3rd, 2021 – 7PM EDT
Cost: $12
Tickets

Nouvelle Vague 🍁 (in-person)  | New Wave
“Their name means “new wave” in French, and refers simultaneously to the French New Wave cinema movement of the 1960s, to the new wave music movement of the 1970s and 1980s, which provides many of the songs that the band covers, and to bossa nova..”
Thursday, September 14th, 2021 – 7PM EDT
Cost: $43+
Tickets

Walk Off The Earth 🍁  (in-person)  | Indie Pop
“The group is known for its music videos of covers and originals. The band is well known for covering pop-genre music on YouTube, making use of instruments such as the ukulele and the theremin, as well as looping samples.”
Saturday, September 18th, 2021 – 7PM EDT
Cost: $46+
Tickets

Julien Baker (in-person)  | Indie Folk
“She has received widespread critical acclaim for her music, which often confronts issues of spirituality, addiction, mental illness, and human nature. In addition to her solo work, Baker is known as a member of the supergroup ‘boygenius’ alongside Phoebe Bridgers and Lucy Dacus.”
Monday, September 20th, 2021 – 7PM EDT
Cost: $28+
Tickets

Stephen Day (in-person)  | Folk
“..called his track Every Way (Supernatural), a huge musical leap forward and went on to add that it signals rebirth and renewed creative force. The five song EP made alone in the confines of his bedroom lend to the crooner vocal performance his fans have come to love as well as moving his sound into a contemporary space.”
Wednesday, September 29th, 2021 – 7PM EDT
Cost: $15
Tickets

Megadeth and Lamb of God (in-person)  | Metal
“The must-see Metal Tour Of The Year co-headlined by MEGADETH and LAMB OF GOD will soon lay waste to cities across North America as the highly anticipated trek finally hits the road.”
Thursday, September 30th, 2021 – 6PM EDT
Cost: $46+
Tickets

Emotional Oranges (in-person)  | R&B, Pop
“..when people listen to our music they often question if it’s dance, hip hop, pop or R&B, but it’s really just a blend of all of the musical influences that we grew up on.”
Thursday, September 30th, 2021 – 7PM EDT
Cost: $38+
Tickets