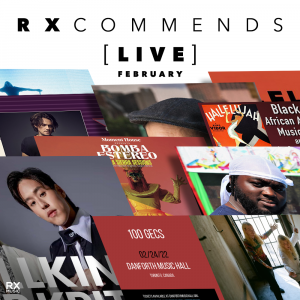 February is an important month with much to celebrate and reflect on. In addition to our concert highlights for February, we’ve included some important virtual discussions to raise awareness for Black History Month.  Don’t forget to check out the rest of our Editorial page for more Black History Month content/articles!

Here is a curated playlist with music from the featured artists for you to enjoy as you browse through the events:

Black Music in Film: African American Music 1929-71 (virtual)  | Discussion
“A discussion of the evolution, the depiction and participation of Black musical artists from the early sound era of the 1930’s to the dawn of the blaxploitation era of the early 1970’s. ”
Saturday, February 5th, 2022 – 3PM ET
Cost: FREE
Tickets

Before the 6ix: Behind The Beat 🍁 (virtual)  | Hip-Hop
“Before the 6ix is a series that connects the dots from Toronto’s present-day internationally recognized hip-hop influence to the rich and vitally important roots of its past.”
Wednesday, February 9th, 2022 – 7PM ET
Cost: FREE
Tickets

Billkin and PP Krit (virtual)  | Pop, Rock
“Billkin and PP Krit’s Worldwide Digital Experience will the first time that both of them will perform the songs from “I Told Sunset About You” and “I Promised You the Moon” to a global audience. Featuring a new twist of musical arrangements and an exclusive re-defined production this special 60 minute performance experience will bring you back to the series once again.”
Saturday, February 12th, 2022 – 9PM ET
Cost: $50
Tickets

K.Flay (in-person)  | Hip-Hop, Alternative
“Her work has covered genres including hip hop, alternative hip hop, indie, and pop rock. She has described her sound as “genre-defying” and draws from lo-fi pop and hip hop with a strong indie component in her sound.”
Monday, February 21st, 2022 – 7:30PM ET
Cost: $20+
Tickets

100 gecs (in-person)  | Electronica, Pop
“Their music has been noted for its often chaotic yet catchy mixture of various styles, and has been described as exemplifying the 2010s genre hyperpop.”
Thursday, February 24th, 2022 – 7PM ET
Cost: $82+
Tickets

John Mayer (in-person)  | Rock, Pop
“On Feb. 17, John Mayer will officially launch his Sob Rock tour, so named after the singer/songwriter/guitarist‘s eighth studio album, 2021’s slightly “yacht rock”-leaning Sob Rock. On Monday, Mayer revealed the opening acts tapped as support for the tour, and promised news of who would be performing with him on stage, phrased as ‘a band you’ll have see to believe.'”
Sunday, February 27th, 2022 – 7:30PM ET
Cost: $83+
Tickets