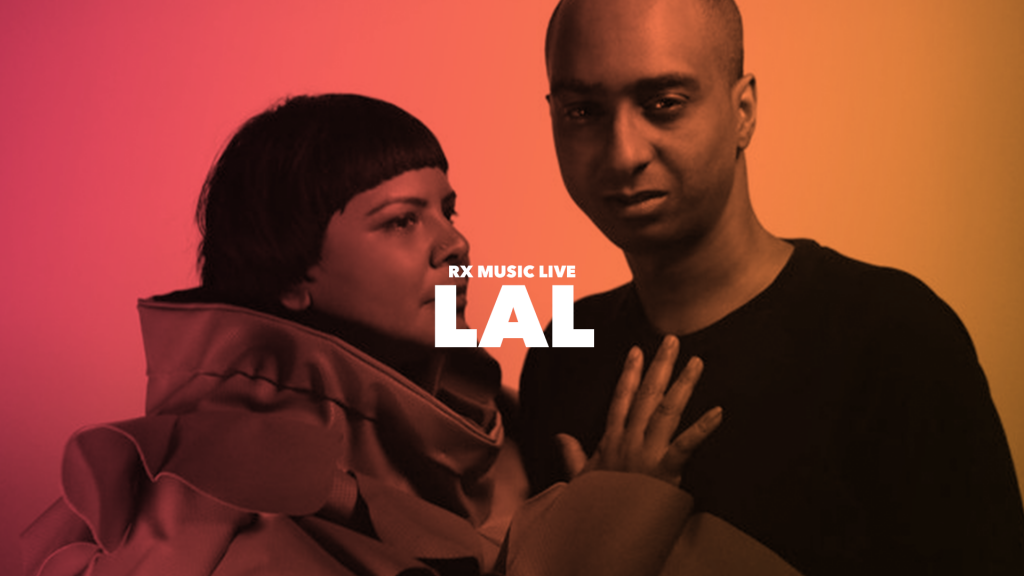 Representing various countries such as Uganda, Bangladesh, Barbados and India, Toronto-based collective LAL have an inimitable approach to their songwriting. They’ve recently been included in the 2019 Polaris Long List, and their fifth studio album Dark Beings is now available. In the height of all of this, RX Music sat down with the duo to chat about the new album, their start in the business and their home city of Toronto.

RX Music LIVE: You guys are very busy making music and just released your latest album. Talk to me about the journey so far and how you guys got to this point.

Nicholas: We worked together at a record store, HMV, which is no longer in Toronto. That’s where we met and we started making music from there. We’ve been making music on and off since then.

Rosina: We’ve been around for 20 years so our memory gets a bit murky (laughs). When it comes to the Brampton Hip-Hop scene or the Rexdale Hip-Hop scene, he was producing for another trio and they produced for a lot of early MC’s in Toronto. So, I kind of would hang out with them and check out their studio sessions. HMV at that time was like, you know, this was pre-American radio so everything was like underground, everything was community based, so we were really in the thick of like amazing Indie, Hip-Hop and Electronic. So we just hung out for a while and I just kind of bugged him and they finally he caved in (laughs).

Nicholas: Haha yeah! This was definitely pre-BET, pre-Flow 93.5, etc.. There were a lot of people just doing things for themselves and we kind of came out of that generation.

Rosina: Anybody who would work at the store loved music so we would hang out with metal heads, punk heads, jazz folks. We were really part of the musical community and our records are reflective of that.

RX Music LIVE: What’s the biggest struggle you had to overcome both as musicians and individuals?

Nicholas: I think for me it’s actually working with Rosina and actually finishing something (laughs). You know, just finding a place where we can actually come together and agree on something is actually a very hard thing to do sometimes. It’s no fault of anybody’s.

Rosina: On this record we ended up hiring Jim Anderson who produced Cold Specks last 4 albums. We really needed to bring him in so we wouldn’t fight. I think for me the biggest struggle has been, like, we’re good and have community, and we’re funded, but it’s finding the support in this country for Electronic music. We’re not “mainstream”, and that’s been hard finding managers. But, that’s every band’s complaint. So, we’re just looking outside of Canada, trying to find administrative support.

RX Music LIVE: The band name is pretty unique, where did that originate from?

Rosina: I’m from Bangladesh and Nick is from Bengal and Nick’s family is from Barbados, and it just means the color Red. We originally had a different name that we wanted but we knew that people couldn’t pronounce it so we went with LAL. Also because the color evokes so many things: revolution, love, anger, passion and our music is all about those things coming together.

RX Music LIVE: Who are your dream collaborators?

Nicholas: Hmm, that’s a tough question. I’d really like to work with Ron Carter, he’s an amazing bass player. Herbie Hancock would be another one. Any of the Jazz greats would be a dream for me, just to expand my knowledge of music.

RX Music LIVE: Does your hometown of Toronto have any influence on your song writing?

Rosina: Definitely, I think because we’re such music lovers and such community folks, we really participate in all that Toronto has to offer whereas I think a lot of people just stick to their theme. We hang out in the Techno scene, the Hip-Hop scene, the International music scene, the Folk scene, and I think our music is a reflection of what this city is really about and not just the stereotypes of what people think this city is about.

RX Music LIVE: I listened to the new album, Dark Beings and I really enjoyed it. Talk about bringing the album to life and why this was the final product you wanted people to hear.

Nicholas: I think we really wanted to do away with our old way of producing and explore. We kind of wanted to get away from the 12-bit sampler world and move into modern technology which was a little scary at first to tell you the truth because we were based in a 12-bit 90’s Electronic aesthetic and so we kind of wanted to move past that. The end result was what it was and we did 15 or 16 songs and chose the best ones with Jim. It was probably one of the hardest things I’ve done in my whole life to tell the truth, just based on the amount of effort and we just really had to make some serious decisions.

RX Music LIVE: What goes into deciding what makes the album and what doesn’t?

Nicholas: Actually this time we didn’t. We left it to Jim. We’re like “here, you do this” (laughs), because (Rosina and I) are coming from different places.

Rosina: We’ve been making music for over 20 years, but we stepped out of the industry about 10 years ago to open up Unit 2. We just got tired of the music industry and out of Unit 2 we were trying to create safer and more inclusive space, anything from Punk to like Techno. Our last record Find Safety was about that experience of people coming together. This record is more about the freedom that we find when we come together. There are so many things happening environmentally and just marginalized communities that this record was about trying to address a lot of those things through metaphor and using nature as metaphor.

RX Music LIVE: There’s one song specifically on the album that I want to talk about and that’s the lead single, Losing Myself. The song’s lyrics give hope to those dealing with mental health. Why was now the right time to shine a light on this?

Rosina: I think because we’re so connected to the brass truth, it was organically just happening through our space and our community. That song was also the first one that our friend Jose, who does projections with us, really wanted to do a video for. So, from the get-go we were like “let’s go with that one” because he has the time and energy to do it. Also, it just happened to intersect with what’s happening in the city and really all over North America. Also, us coming from a community of folks that, particularly in the arts, also deals with mental health, drugs and alcohol addiction including ourselves throughout the last 20 years. These are some of the best people that we know and love and we wanted to honor our community but also address that we shouldn’t be shaming people. Everyone deals with some sort of mental illness, whether we’re open about it or not. We really wanted to show that we don’t need to look at it this way.

Nicholas: You have to come from the perspective of drug and alcohol addiction, and that it should be treated as a medical thing and not necessarily as a criminal thing. So, the song came out of that idea as well.

RX Music LIVE: Obviously the goal of any artist is to reach as many people as possible. Is there anything more personal you’re hoping to achieve with these songs?

Nicholas: We’ve always worked from the concept of slow growth and working with people at their capacity and developing relationships. That’s basically our goal for the rest of our lives, to continue to create relationships with people inside and outside of Toronto. One person at a time in different countries and different places is fine by us.

Rosina: I think that because we come from such a diverse community, like, we have folks from all over the world, people who have migrated here, friends and allies, it was just really important for us to continue to – particularly around environment, like I’m actually really freaked out about what’s happening environmentally and the connection between women’s bodies, children’s bodies and racialized bodies being violated and I believe there’s some kind of connection between those 2 things and I think a lot of us are aware of these things but if we don’t start to change the way that we work and decolonize, we’re not gonna be around for much longer.

RX Music LIVE: For anybody reading this that may not be too familiar with Unit 2, can you explain what that is and how it speaks to you guys?

Rosina: It’s an arts community house that’s been around for 10 years. We basically just opened up our house – we work with a friend called Danielle Mac – and we allow people to come in, do what they want and we support that. They’re amazing people who just want to have a safer space to either have a dance party or a punk show or have a workshop. The city’s become so expensive that the point of this space is for it to be accessible monetarily but also physically accessible. So many places are being shut down so the point is to try to display some culture in this city as much as possible.

RX Music LIVE: Your fans are reading this. What do you want to say to them?

Rosina: I think support is important. Don’t get caught up in BS. Be compassionate. We’ve got to come together and support each other much more. Whether it’s our music or somebody else’s music or a fundraiser of some sort, let’s actually support each other and make time to connect 1-on-1 and not just online.