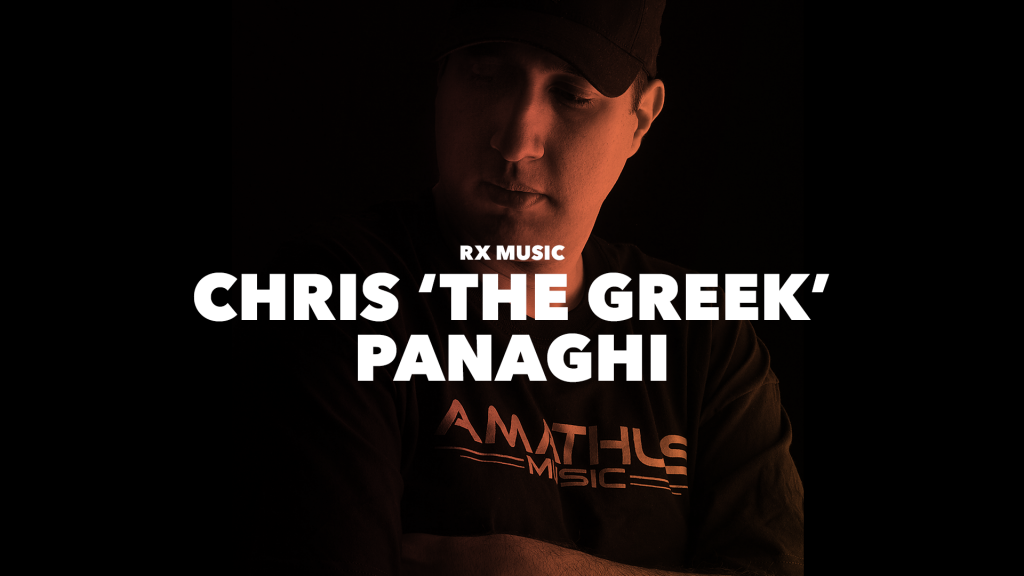 Chris ‘The Greek’ Panaghi is a pioneer in the dance music scene. Starting out as a DJ in the New York club scene, he quickly became a hot commodity. Eventually he started to release his own music that was incredibly successful, making its way on to the Billboard Dance charts. Chris’ love for dance music inspired him to start Amathus Music, which to this day is one of the most preeminent electronic dance labels in the world. He’s also created official remixes for artists such as Michael Jackson, Jessica Simpson and Celine Dion. RX Music had the chance to sit down with Chris, who to this day is still DJ’ing, to talk about his early days, the current landscape of the music industry, and of course, his label, Amathus Music.

RX Music: At what point in your life did you decide to start making music?

CP: I started out in the 90’s as a club DJ and of course was working a lot of the clubs and private parties in the New York tri-state area. I guess after I started to work in all of the clubs, it was kind of a natural progression, since I was playing all these records, to get that producer itch to go in and start producing and remixing some records.

RX Music: Which part of being a DJ is the most fulfilling for you?

CP: There’s something exciting about the energy of a crowd, and taking people on a trip, and you know, just the overall DJ experience. I’ve said it before and I’ll say it again, the energy of a crowd, there’s nothing like it and really just impacting them by taking them on a musical journey. It’s one of the coolest things.

RX Music: What are you looking for in a song that you want to remix, or an artist that you’re looking to bring to your label, Amathus Music?

CP: Amathus Music was always founded with the concept of developing new artists and really releasing high quality music. Now that everything is so global, we really focus on either great quality songs with a talented producer or production that can match it, or, if it’s going be a cover version, that it’s done in a really unique way. But overall, Amathus Music was really founded with the concept of ‘Hey, we like working with new artists and we’re really looking for high quality music.’

RX Music: Given your longevity, what advice do you give to new artists and DJ’s you’re discovering?

CP: I think that today’s music industry is a lot more challenging than it was especially when I started in the 90’s. I don’t think it’s just talent anymore. I think an artist to be an artist, is not only the talent of honing your craft, whether you’re a singer, a producer, a DJ, remixer, or whatever that might be. You really have to be the complete package. You have to be active on social media. You have to be out in the scene and going to different conventions, trade shows, conferences, and putting yourself out there because there’s just so many artists doing the same thing as you and are equally as talented. So, I think you need to separate yourself more as an artist and get out there and just show who you are.

RX Music: What does it mean to you to see what Amathus has accomplished thus far, having built it from the ground up?

CP: We’re really excited you know. Amathus Music now in 15 years, we have a rich catalogue of a lot of different music. Even though we’re primarily a dance-based label, we’ve sort of rounded up a catalogue that also features other genres, but for me it’s very fulfilling. We have a lot of great artists affiliated with the label. Honestly, it’s really exciting to wake up and do what I love every day. To me, it’s the biggest joy.

RX Music: Is there a reason why you’ve always stayed in and around the Dance music genre? Was it a personal thing, or did you feel like you could get a lot of steam behind it?

CP: You know, that just comes from my DJ roots. Dance music has always been in my blood. Nowadays as it’s transitioned into EDM, it’s interesting to get new dance enthusiasts perspective on it. I’ve just always loved creating, playing, DJ’ing, working with dance artists, its great!

RX Music: What do you enjoy more… creating or remixing?

CP: Both are really cool. I think it’s challenging when it’s all original and you’re creating your own from scratch, but you know, to remix someone else’s art is also very special. I’ve been very, very blessed to work with a lot of great projects over 20 years, and remix artists from Michael Jackson, Celine Dion, and the list goes on.

RX Music: Do you have an ideal collaborator or collaboration?

CP: Honestly I really just like working with talented people. If it’s solely myself just being in the studio, sometimes you can put out things that are coming to you and that are your vision, but when you collaborate and you have that give and take with another producer or artist, it definitely adds a whole other level.

RX Music: Where do you see Amathus Music in the next 5-10 years?

CP: We’ll always continue to release great music, and definitely keep achieving our goals but I think the trick is as the music industry landscape changes, finding the right things that we feel and are excited about to work with is really the most important thing. We like to work with artists that share a similar vision with us and hopefully everyone else sees that we’ve solidified ourselves as a company that delivers quality music for a diverse audience. Some of it might be vocal driven, and some of it might be some underground club stuff, but more than anything we enjoy releasing music and getting it out there.